The completion of the first six of 32 private hangar condominiums coming to Winchester Regional Airport in Virginia was celebrated with a ribbon-cutting ceremony on December 14. 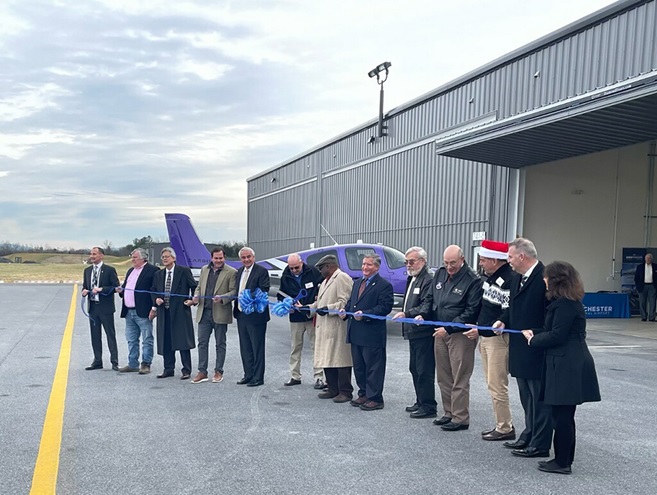 Airport, state, and local officials are joined by Adsurgo Development staff in a ribbon-cutting celebration at Winchester Regional Airport in Virginia. Photo by Paige Kroner.

State and local officials were joined by members of the KOKV Hangars project, Adsurgo Development, and TMG Construction as they marked the completion of the first half of phase one of the six-year project. Five more hangars are expected to be completed in the second half of phase one.

The first 11 hangar condos of phase one are currently available for purchase for about $600,000 on a 40-year airport ground lease. The cost of these hangars equates to a value of $1,250 per month and sized at 52 feet wide by 50 feet deep by 18 feet high, cost just over $2 per square foot per month.

Each hangar is insulated and heated, and all options come with a half bathroom. The base option offers a small corner loft, while two other options include the addition of an office or lounge with a larger loft and stairs.

The collaboration between Winchester Regional Airport and Adsurgo Development comes at a time when hangar availability across the United States is in short supply. According to the 2021 AOPA Airport Support Network survey, at airports with waiting lists for hangars, 72 percent of aircraft owners waited from six months to more than two years for a hangar.

“The challenge for airports when it comes to building hangars is not demand but the financial model,” Winchester Regional Airport Director Nick Sabo said. “Because of the shortage in the mid-Atlantic area we were eager to pursue a hangar project, but also acknowledged our own constraints and competition for limited funds. We were fortunate to find a trusted partner in the private sector that had the resources to build this quality infrastructure faster than we could, and in a manner that minimizes risk for both parties. It’s an approach that could work at other airports.”