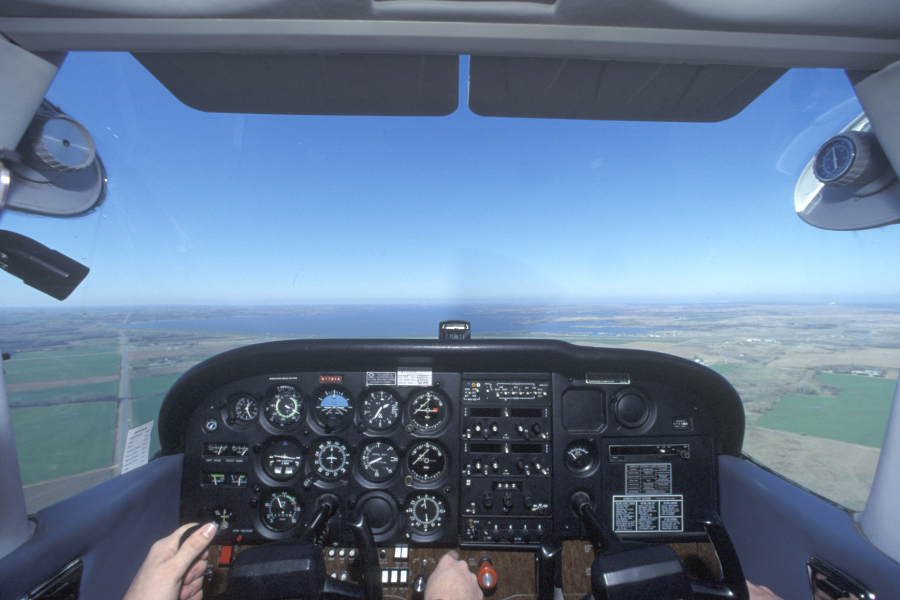 A proper scan optimizes our vision for collision avoidance. However, the term may be a misnomer; scan implies a sweep of the eyes, while the correct scan for conflicting traffic is actually a sequence of intense, fixated observations. The eyes need one to two seconds to adjust before they can focus; a continuous sweep blurs the vision.

While there is no “one size fits all” technique for an optimum scan, many pilots use some form of the “block” system scan.

MACs are frequently the result of one aircraft overtaking another, so check for overtaking aircraft after every few scans, especially during approach and landing…

Divide the sky into blocks, each spanning 10 to 15 degrees of the horizon, and 10 degrees above and below it—for a total of 9 to 12 scan areas. Imagine a point in space at the center of each block. Focus on each point to allow the eye to detect a conflict within the foveal field (see sidebar), as well as objects in the peripheral area between the center of each scanning block. Also, scan vertically—10 degrees above and below your flight path—for potentially conflicting traffic. 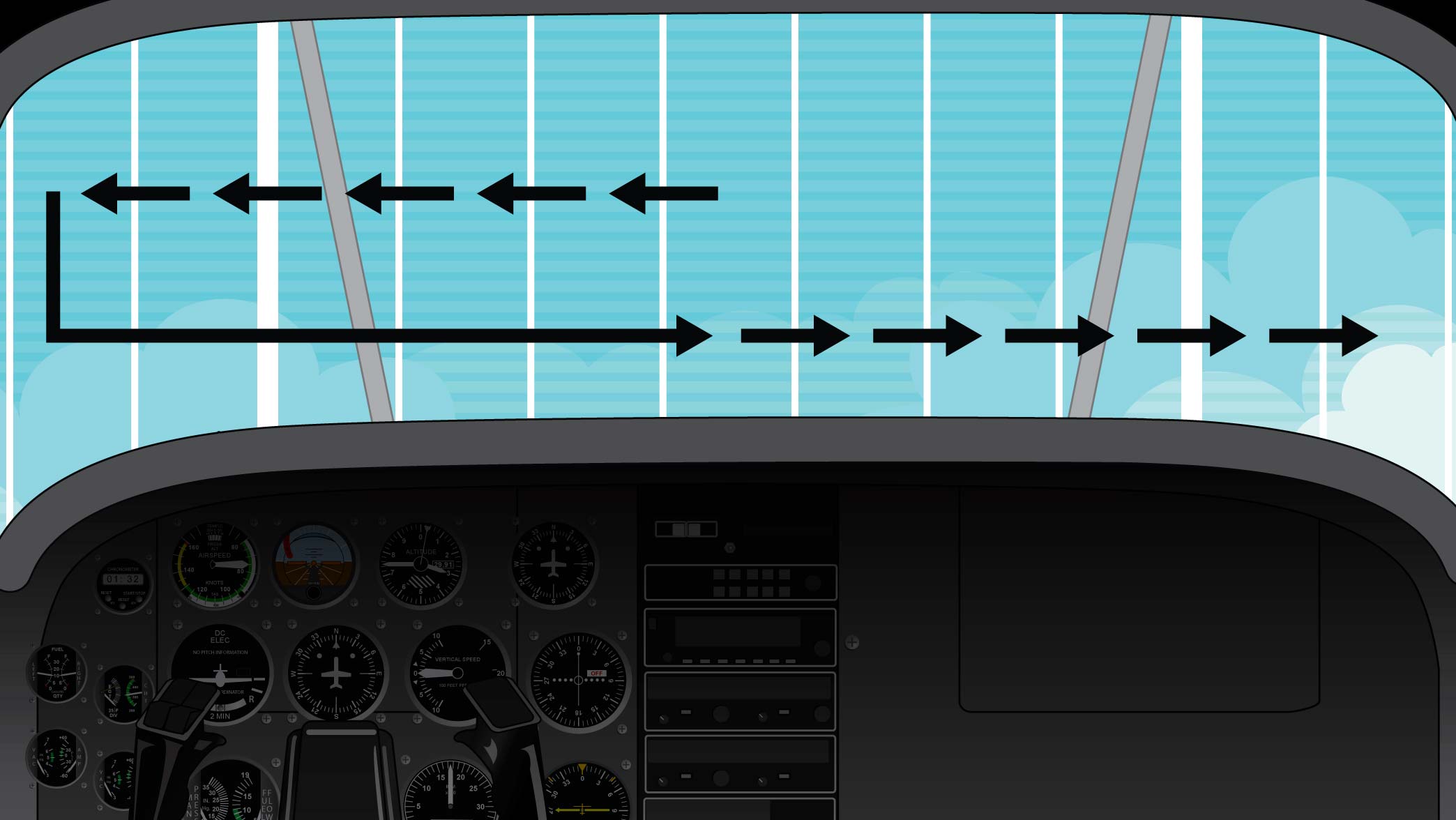 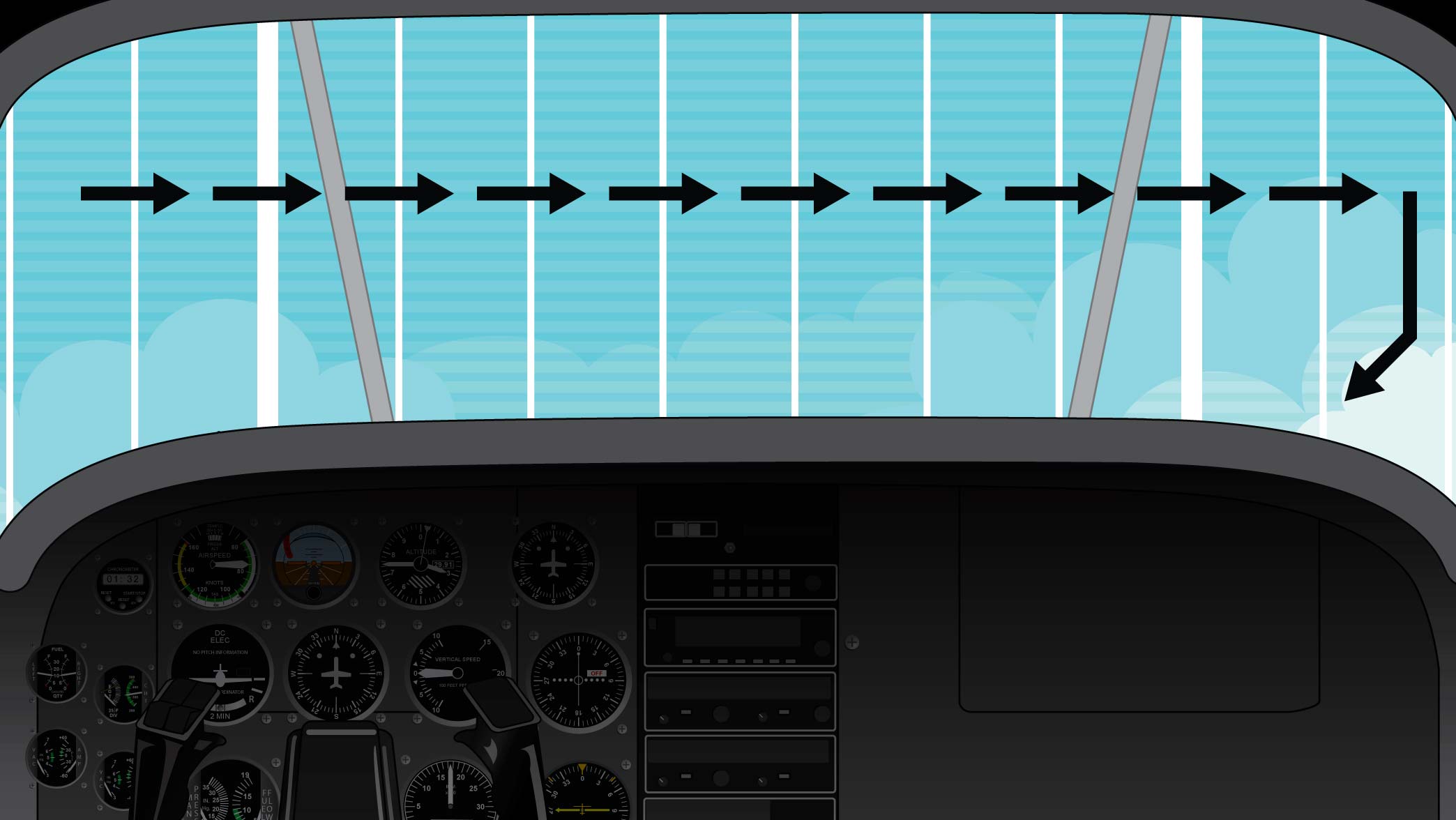 MACs are frequently the result of one aircraft overtaking another, so check for overtaking aircraft after every few scans, especially during approach and landing when midair collisions are most likely to occur. 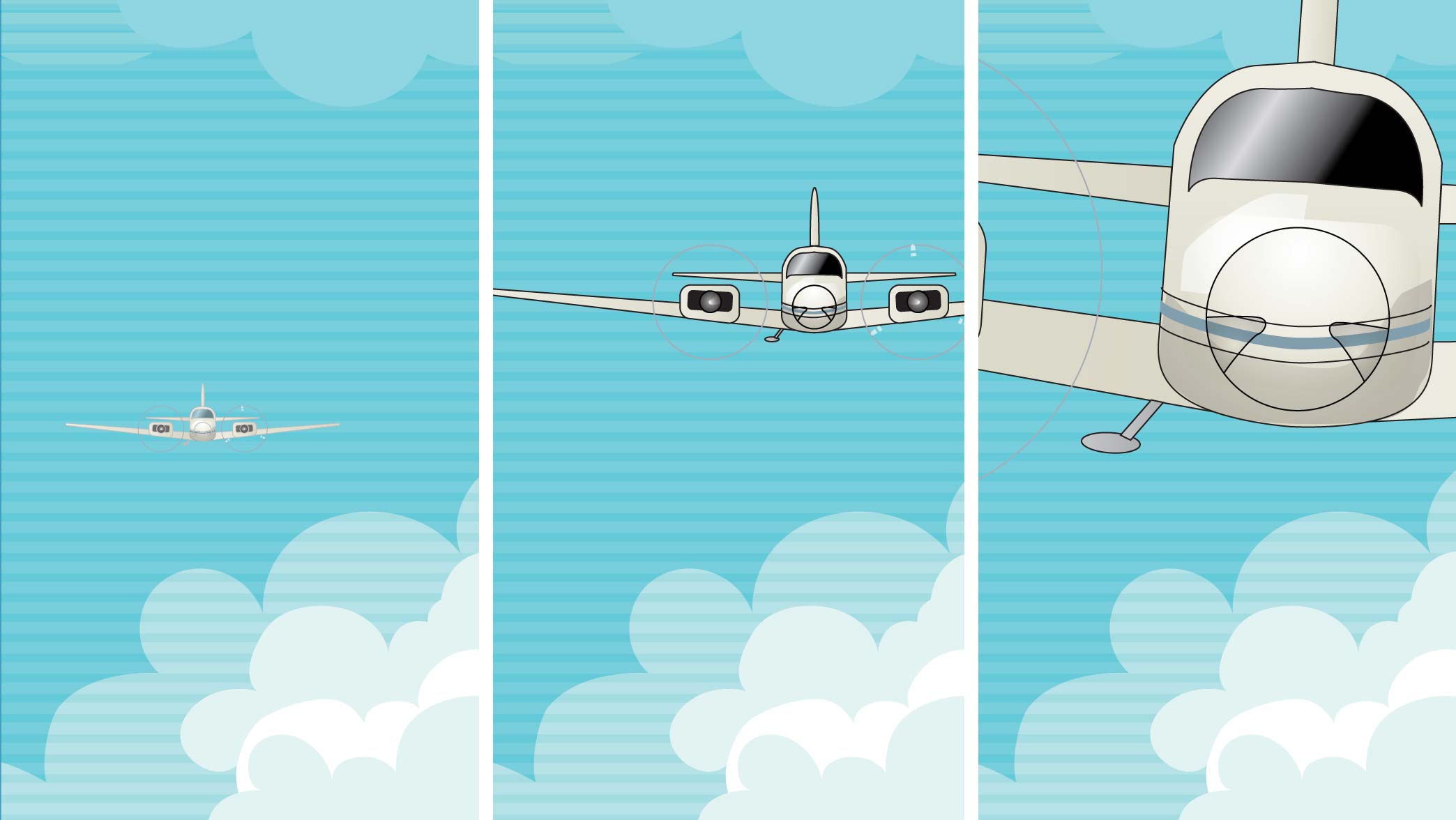 Motion is invaluable in drawing the eye’s attention. Yet two aircraft on a collision course will appear virtually motionless to each other. When observed from the cockpit, the conflicting target will look like a small, stationary speck until it is at a distance from which it may be too close to avoid. This is called the “blossom effect.” If a pilot sees an aircraft that remains in the same spot in the windshield (unless it is directly ahead and moving in the same direction), there is a high probability the two aircraft will collide unless one changes their course. Once a threat has been identified, it’s essential to keep the other aircraft in sight until the threat is resolved.

…irritants in the air, fatigue, age, residual alcohol in the bloodstream, and lower oxygen levels can all impact the ability of your eyes to perform at the optimum level.

Haze, flight over open water, or an obscured horizon can make it difficult to see distant objects, impairing the ability to refocus. The same phenomenon can occur when flying over a haze or cloud layer with a high overcast layer above. Focus on the farthest point visible, even the wing tip, to overcome the problem. In poor visibility, repeat refocusing every minute or so.

In addition, be extra vigilant when the sun is low on the horizon. It makes any traffic between the observer and the sun very difficult to see.

Optical illusions can affect what we see in flight. For example, an aircraft at a slightly lower altitude coming toward you may look like it’s above you and appear to descend as it comes closer. At night, a pilot’s ability to judge distance above the ground may be impaired when on visual approach to a runway. It may also be difficult to identify aircraft below you that blend in with lighting on the ground.

In addition to atmospheric conditions and optical illusions, irritants in the air, fatigue, age, residual alcohol in the bloodstream, and lower oxygen levels can all impact the ability of your eyes to perform at the optimum level.

Eighty percent of the information we absorb in everyday life is obtained through our eyes. An effective scan begins with an understanding of how vision works.

Effective cockpit resource management (CRM) requires an efficient scan. The more quickly instruments and gauges can be monitored and interpreted, the more time available to scan for traffic. An experiment conducted with military pilots found the average time needed to conduct an effective scan was a total of 20 seconds—17 seconds for the outside scan, and three seconds for the panel scan.

CRM also includes effectively handling distractions such as passengers, avionics, and chart management tasks. In addition, GPS receivers are extremely capable, but they are also pilot workload intensive—particularly when multiple waypoints are inserted into a flight plan. Program the GPS on the ground (when not moving) to provide more time for scanning in the air.

All aircraft have blind spots. High-wing aircraft have reduced visibility of aircraft above them, and can have their view of traffic blocked when making turns in the pattern as the wing is lowered in the direction of the turn. Low-wing aircraft have a large blind spot beneath them that may obscure conflicting traffic when descending into the pattern or while on final approach. Recognize and compensate for visual limitations, whether it’s raising a wing to check for traffic before making a turn in a high-wing airplane, or making shallow S-turns when climbing or descending in any aircraft. 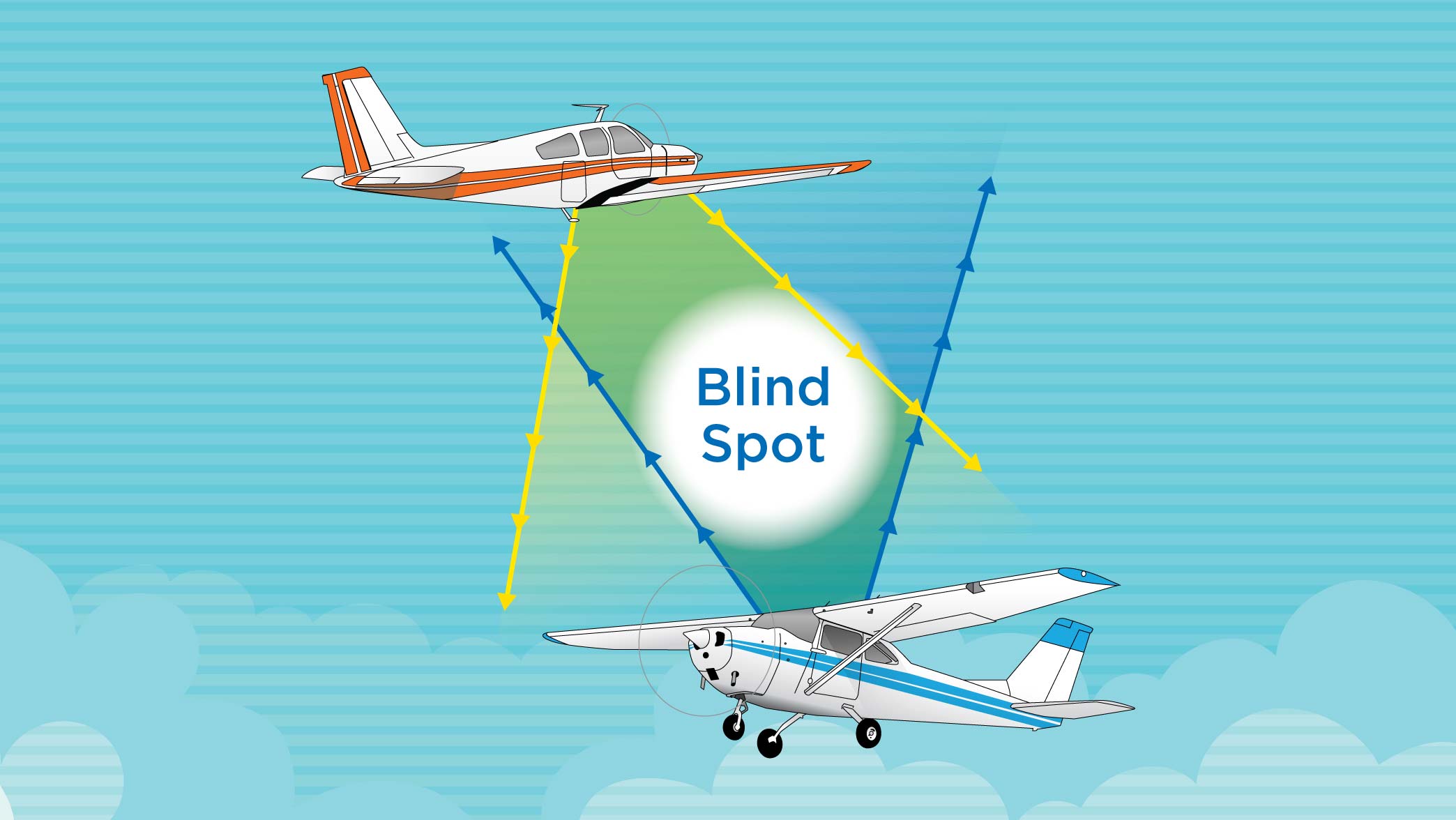 Windshield distortion, placement of window and windshield posts, and other structural elements can also hinder visibility. The brain requires input from both eyes to accurately interpret the visual cues it receives. If a windshield post or other obstruction blocks the vision of one eye, the brain may not perceive the object—even with the other eye providing input. A high glareshield can also block vision, which is especially problematic during climbout.

ASI recommends doing a belly check when you’re coming off an extended turn or when turning from base to final. That belly check provides one last opportunity to check that final approach is clear and there’s nobody coming straight in that will be a conflict before you go belly up and turn onto the final approach leg.

A Piper PA–46 Malibu and a Cessna 172 Skyhawk collided during landing at North Las Vegas Airport in Nevada. The Cessna had been doing traffic pattern work and was entering a right pattern for Runway 30R. The inbound Malibu was cleared to overfly the airport and land on Runway 30L. The two aircraft collided on the extended centerline of Runway 30R. Learn more about the tragic accident that killed all four occupants.