Flying in the Mountains 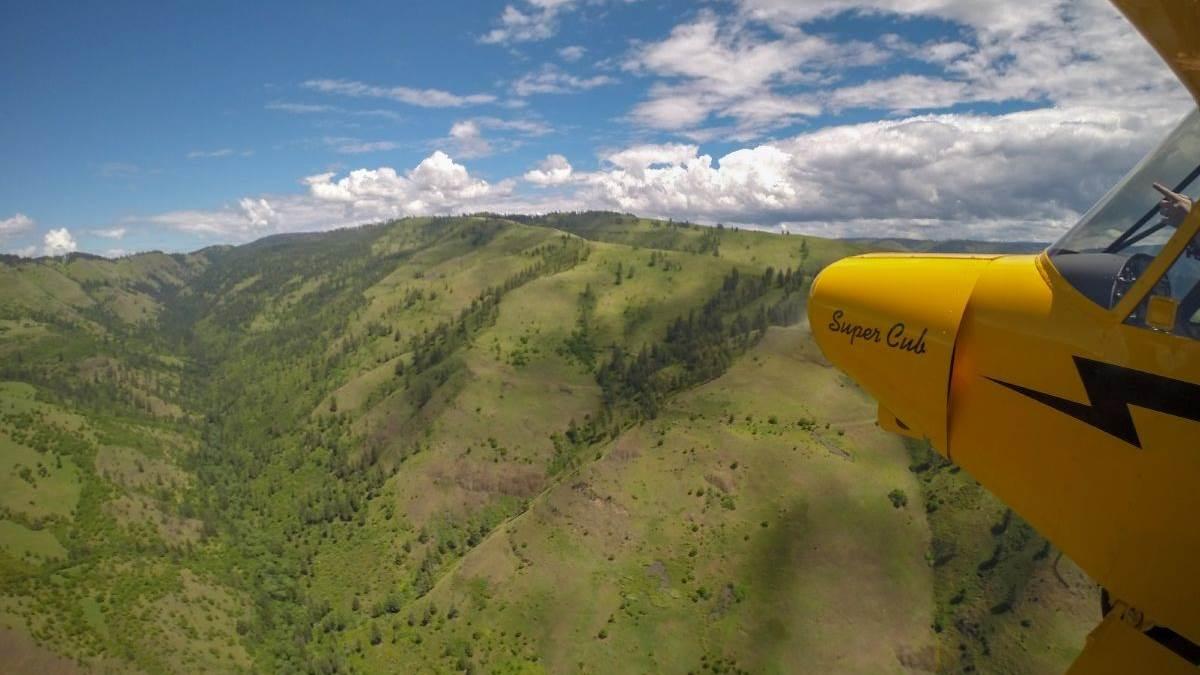 Let’s take a look at a few practical concepts. Note: This is only meant as an introduction to the challenges of mountain flying. If you’re planning to fly in the mountains, be sure to get training from a qualified instructor.

You’ll likely fly to and from soft, short fields in the mountains. To be safe, you’ll need to be comfortable and consistent with your short/soft technique before you attempt landing at any mountain airstrips.

Also, explore options (safely and with a CFI if needed, and as approved by your POH/AFM) for taking off with flaps. In the backcountry, this will help you leave the rough surface earlier and protect your propeller from potential damage. In most cases, the sooner you can depart the ground the better!

Before flying in the backcountry, you must be able to land on your chosen spot every time while using a short/soft field technique.

While the checklist is important for determining how to perform a short field landing, sometimes it helps to think about why we do what we do.

Imagine water flowing through a fast-moving river. As flowing water is disrupted by rocks and other obstacles, it curves and moves in a predictable manner. The same is true for wind blowing past mountain ridges and peaks. The difference is that we typically can’t see these wind currents, yet they can pose a significant hazard to flight.

Certain mountain wind patterns can make it difficult or impossible to maintain a safe altitude above terrain.

Strong downdrafts can easily exceed aircraft climb performance. Always give yourself an out.

Downdrafts: Downdrafts occur on the leeward/downwind side of mountains. Watch your airspeed and altitude, and keep a safe distance from terrain: Strong downdrafts can easily exceed aircraft climb performance. Always give yourself an out.

Turbulence/wind shear: Turbulence and/or wind shear can occur where downdrafts and updrafts meet (i.e., in the canyon valley). If you must fly in this area, always maintain sufficient altitude and distance from terrain to safely turn around.

Updrafts: Updrafts occur on the windward (upwind) side of mountains. Use caution to avoid being “lifted” into thin air and/or adverse weather.

Crossing mountain ridges at a 45-degree angle allows more room to turn away—and may require less bank angle—if unexpected turbulence or downdrafts are encountered. Keep your options open for as long as possible—don’t commit to the ridge crossing until the last possible moment.

Once you’ve crossed the ridge, resume your route of flight either perpendicular or diagonally from the mountain ridge, whichever takes you most directly toward lower terrain.

Approaching a ridgeline during a tailwind could result in a shallow climb angle, which further supports the 45-degree approach angle—allowing you to turn away rather than climb.

When Crossing a Ridge

Watch this clip excerpted from a 1991 mountain flying video. The same principals apply today as they did then.

An Accident with a Lucky Outcome

One accident report recounted a pilot out for an afternoon of sightseeing on the north side of Mt. Rainier. He used updrafts from a strong north wind to carry his Cessna 140 up to the top of the 14,410 peak. When the wind lifted him over the top, the airplane didn’t have enough power to maintain altitude. Fortunately, the updraft deposited him in a deep snowfield where he and his passenger stepped out unhurt. There are more practical uses of upslope wind than this!

In the mountains, it’s often best to stay on the windward (i.e., upwind) side of ridges. You’re less likely to encounter performance-robbing downdrafts, and if you need to turn away from the ridgeline you’ll be turning into the wind—which will decrease your groundspeed and improve your climb gradient. Be careful, though: If you’re in a valley or canyon, the turn may also lead you into downdrafts on the leeward/downwind side of the other ridgeline.

Many times, pilots don’t realize until it’s too late that the terrain is rising faster than the airplane can climb. The result is often a desperate climbing turn that leads to a stall/spin accident. Whenever you’re flying below the canyon rim, choose one side to fly along, and slow down. What side you choose will depend on wind and sun angle. Below the canyon rim, shadows can obscure terrain features and trick our eyes into thinking we’re further away from terrain than we are, and it’s better to fly in favorable lighting when possible. The configuration for canyon flight typically involves a slightly lower power setting and, in some cases, “lift” flaps (typically the first setting). Never fly in the middle of a canyon: doing so halves the space you have for a 180 or canyon turn, should you need it.

What is a canyon turn, anyway? You may have been told that it’s like a chandelle, but that’s not quite right. A canyon turn is a low velocity, high performance, 1G+, 180-degree turn that may include a descent. It is meant to create an escape for a pilot who has inadvertently flown into a box canyon. It is an emergency maneuver, not a get out of a jail free card. Mountain pilots should make decisions to avoid using a canyon turn if at all possible—but should also recognize immediately when one is needed. A moment of hesitation could mean the difference between life and death.

Can you make a canyon turn? Airspeed and groundspeed are huge factors in being able to successfully complete a canyon turn—slower is better! 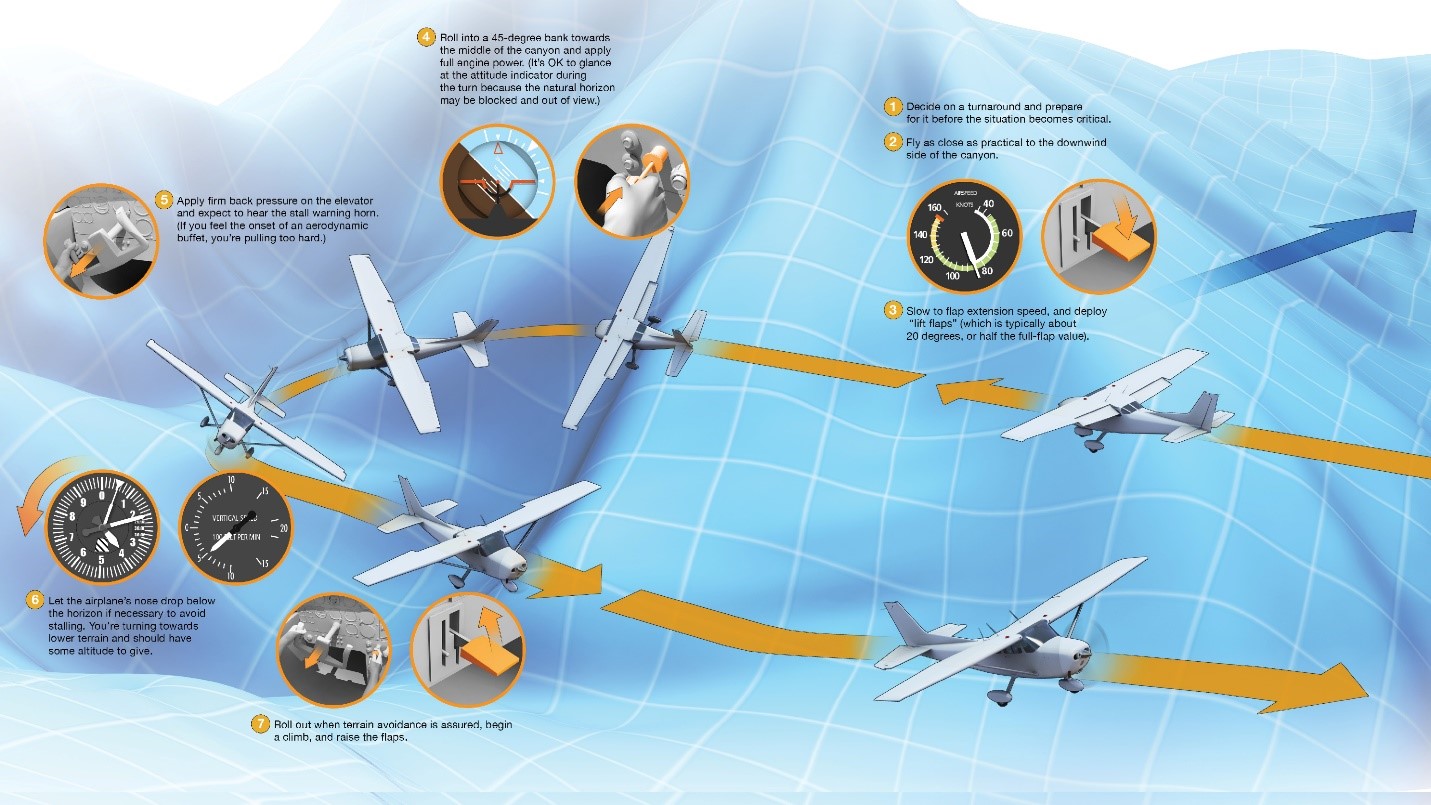 RPS from the field: No Go-Around

Backcountry flying is mesmerizing and rewarding, but it also presents unique challenges. For example, exploring a remote airstrip—especially a no go-around field surrounded by high terrain—requires thorough briefings and extra planning before committing to the flight. Join the AOPA Air Safety Institute’s executive director Richard McSpadden in "No Go-Around" as he speaks with four experienced pilots who discuss lessons learned from a flight that went terribly wrong.