Get the app Get the app
Already a member? Please login below for an enhanced experience. Not a member? Join today
Pilot Resources Aircraft & Ownership Aircraft Fact Sheets Mooney Acclaim 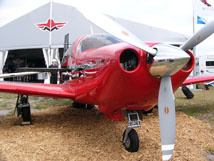 The numbers suggest a turboprop rather than a piston single: 237 knots, an 1,840-nm range, and a 25,000-foot ceiling. But no, the latest Mooney is yet another variation on the airframe and engine combination that has served Mooney so well over the years. Mooney's new Acclaim — type designator M20 TN — introduced with great fanfare at the 2006 Sun 'n Fun Fly-In promises to be the ultimate Mooney. It replaces the Bravo as the company's flagship model, and orders for 33 Acclaims had been taken by midsummer 2006.

The key to the Acclaim's speed is its turbocharged, intercooled, 280-horsepower Teledyne Continental TSIO-550-G engine. A pair of Garrett turbos — one for each bank of cylinders — helps divide the compressors' workloads and give faster throttle response because of more rapid spool-up times. Mooney turbonormalized the engine by setting the turbos for a maximum manifold pressure of 33 inches. This, the company says, lets the Acclaim put out its full 280 horsepower all the way up to 20,000 feet or so, then put out some 262 horsepower up to the airplane's 25,000-foot service ceiling.

Although the Acclaim's TSIO-550 is the same basic engine as the normally aspirated version in Mooney's Ovation3, it puts out 30 fewer horsepower, thanks to a derating provided by a reduction in engine compression ratio, doesn't work as hard, yet flies higher and faster (the Ovation3 claims a 196-knot maximum cruise at 20,000 feet) — all while enjoying the reliability benefits of low cylinder head temperatures.

The Acclaim's interior also has received some upgrades over preceding Mooneys. AmSafe air-bag seat belts are standard up front, and an option for the two aft seats. The armrests are more streamlined and less intrusive, which creates slightly more cabin width. The brushed-metal door handle is of a new, bigger design that provides more leverage for opening and closing, has no sharp edges, and is based on the handle used in the Mooney PFM (the M20L, Porsche engine-powered Mooneys) built way back in 1988 through 1990. There's also a new A-pillar handhold, more foam on the seats' side bolsters and seat backs, and new control yokes that are deeper vertically, and leather covered.

Like the rest of the Mooney line, the Acclaim comes with a Garmin G1000 avionics suite. Much has been said about the G1000, and its features complement the Acclaim's mission well. The G1000 does so much that it's impossible to mention its full capabilities in this space. To be brutally brief, suffice it to say that leaning is a snap, thanks to the exhaust gas temperature symbology; situational awareness is excellent, thanks to the multifunction display's huge moving map; fuel status pages give you a precise count on gallons used, and time remaining in the tanks; and XM Satellite Weather datalink information gives both the big and small picture of the weather situation. As for ice protection, there's the optional $42,300 TKS "weeping wing" system that forces a glycol solution through tiny pores in wing leading-edge panels. The Acclaim's TKS installation will be approved for flight into known icing, according to Mooney.

This airplane must be operated as a Normal Category Airplane, Aerobatic maneuvers, including spins, are prohibited. The airplane is approved for day/night VFR/IFR when in accordance with F.A.R. 91 or F.A.R. 135.

Fuel is carried in an integrally sealed section of the forward, inboard area of each wing. Total useable fuel capacity is 102 gallons. The fuel selector valve allows the pilot to set the selector valve to LEFT tank, RIGHT tank, or OFF position. Fuel not needed by the engine is returned to the tank from which it is drawn. The HIGH BOOST pump switch operates the fuel boost pump on high power. The high boost setting is capable of operating the engine at reduced power in case of engine driven fuel pump failure or severe fuel filter blockage. Two electric fuel-level transmitters, working in series, in each wing tank operate the appropriate, left or right, fuel quantity gauges. The optional, visual fuel quantity indicators, in the top of each wing, may be used for partial fuel loading.