Pushing for H.R.2881 It's early August as this article's being written — a quiet time on the congressional calendar. Senators and representatives have gone on a month-long recess, setting the business of lawmaking aside.

It's early August as this article's being written — a quiet time on the congressional calendar. Senators and representatives have gone on a month-long recess, setting the business of lawmaking aside. This lull gives us an opportunity to sum up the status of the FAA funding debate and prepare for the next stage. The FAA's current funding mechanisms expire at the end of this month, so the coming few weeks will be especially critical. If no legislation is passed by September 30, the FAA — strictly speaking — will run out of money and have to cease operations. This invokes the historical example of the federal government's shutdown of 1994, when Congress — for a day, anyway — failed to agree on a budget.

Of course, no one really expects such an outcome with the FAA funding debate; the air transportation system is simply too vital to the nation's security, economy, and political stability. But if no agreements are made, then something will have to be done to enable the continuation of the FAA's work. Some industry insiders believe a continuing resolution will be tacked onto the current funding scheme, extending the current tax and financing for at least 30 more days — and maybe beyond.

We've spent considerable ink explaining what the FAA wants in its version of a funding proposal. In short, the FAA's proposal calls for user fees plus 263 percent (avgas) or 221 percent (Jet-A) fuel tax increases. For many very good reasons, the FAA's bill fell flat on its face from day one. "This bill is dead on arrival," said House Aviation Subcommittee Chairman Jerry Costello (D-Ill.), and that's pretty much the way things have stood with the FAA's ideas ever since. The question has become: What alternative ways can be explored for FAA funding?

The House Transportation and Infrastructure Committee, chaired by James Oberstar (D-Minn.) came up with H.R.2881 (the "H.R." stands for "House Resolution") as its idea of a funding strategy. AOPA is strongly in favor of H.R.2881. It proposes a modest fuel tax increase, no user fees, and maintaining commercial air transportation and fuel taxes at their current levels. In the coming weeks, your help in letting your representatives in Congress know how much general aviation supports H.R.2881 may become vital to winning the funding debate. AOPA, via its Web pages ( www.aopa.org and www.aopa.org/FAAFundingDebate/), will let you know when to write key lawmakers. The timing of any letter or e-mail campaigns is critical, so watch for late-breaking news on those Web pages.

On the Senate side, the aviation subcommittee of the Committee on Commerce, Science, and Transportation, chaired by John D. Rockefeller IV (D-W.Va.), came up with something quite different. Sen. Rockefeller, along with ranking minority committee member Trent Lott (R-Miss.), offered S.1300.

S.1300 has provisions for $25-per-flight user fees for turbine-powered aircraft and recommends a 125 percent increase in Jet-A fuel taxes, plus the elimination of the airlines' current 4.3 cents-per-gallon fuel tax. Commercial air transportation taxes would remain the same.

Sen. Lott has argued for user fees. "We're going to have a fair bill or no bill," he said. "I am prepared to go to the mat.... Everybody is going to have to ante up and kick in." He has said that while everyone is in favor of ATC modernization, "Nobody wants to contribute to it, or they want someone else to pay."

Meanwhile, Sen. Rockefeller has been making strong statements of his own. Speaking of H.R.2881, he said, "I do not believe commercial airline passengers should continue to subsidize corporate jets." He went on to say, "If we do not restore equity, I will look for ways to limit access of general aviation to congested airspace."

On the face of it, S.1300 might seem favorable to pilots of piston-powered aircraft. After all, avgas fuel taxes stay the same, and piston pilots wouldn't have to pay user fees.

But here's the real message to take away from S.1300: The user-fee and fuel-tax exemptions for piston-powered aircraft most certainly will change. As Canadian and Australian pilots have learned, initial promises of exclusion from user fees and taxes can be fleeting. Once the notions of fees and higher taxes have been raised, it's a short step to their across-the-board implementation. Once the camel's nose is in the tent, there's no turning back.

History has shown that governments find it quite easy to raise fees and taxes, but very difficult to lower or repeal them.

The Air Transport Association of America (ATA — which represents airline interests) has been doing its best to influence the public and key players on Capitol Hill. Advertising campaigns — in the form of editorials — have played out in several airline magazines. Passengers flipping through the pages of their seat-back magazines have been treated to arguments that small airplanes are clogging up the skies and preventing airliners from being on time.

The ATA even ran television ads on CNN's Airport Network. Some of the ads feature gems such as a small airplane cutting in front of an airliner, with its pilot saying, "Coming through — I've got a foursome here with an early tee time."

What the ads fail to mention is that it's the airlines that use the lion's share of the airspace and ATC system at hub-and-spoke airports. And as for the small airplane pulling in front of the airliner, all pilots and controllers know that no aircraft is allowed to cut in front of another on runways — or during the landing procedure.

Another awkward truth is absent in ATA public statements — such as an ATA proposal to the Senate Finance Committee's Subcommittee on Energy, Natural Resources, and Infrastructure. The proposal would replace the current airline ticket tax scheme with one that would provide a huge tax break for the airlines. For the first 250 nautical miles of any flight, the ATA urges a new ticket tax formula that exempts the airlines from certain taxes now collected.

The ATA's motivations were characterized by AOPA President Phil Boyer at a user-fee forum at this year's EAA AirVenture in Oshkosh. Playing the role of ATA President James May, Boyer mimicked the airlines' cynical stance: "We get to give up the only tax we pay, and we'll sneak in a $25 fee that opens the door to a privatized air traffic control system...and this is just the beginning of what we can do." 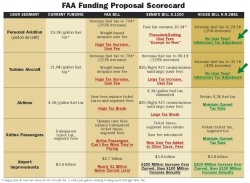 Right now, both the House and Senate bills are still in committee. In fact, Boyer and a panel of other aviation experts testified before the House Ways and Means Committee on August 1. Look for a video of Boyer's testimony supporting H.R.2881 and opposing user fees on AOPA Online.

The next step is for the House and Senate each to pass a bill. After that, a conference committee composed of both House and Senate members will hash out any differences and present the final bill — if they can agree on it — to the president for signing into law.

But that's still in the future. The debate will intensify come the first week in September, and there will be plenty of time for more conflicting views — and more political deals — to be made before the bills go to the full House and Senate.

In the meantime, get ready to play your part in helping boost H.R.2881's provisions all the way through to a finalized bill. As AOPA's experts know so well, members can play central roles in the court of public opinion. As always, check the Web site for late-breaking news on the FAA funding debate.