Pilots in southern California had the opportunity Aug. 20 and 21 to find out more about what AOPA is doing to work on general aviation issues that matter to them—including the effects of costly flight school regulations, the transition to an unleaded avgas, and a potential airspace redesign that could restrict GA operations in the Los Angeles basin.

The setting of the GA Serves America community event was a victory in itself for the GA community—AOPA has been actively involved in working with Oceanside users and the Oceanside Airport Association to fight attempts to sell airport property and place restrictions on airport use. More than 100 people crowded into close quarters at the event to find out more about AOPA’s involvement in planning a transition to an unleaded avgas and fighting unnecessary security requirements, and to connect with a member of Congress who understands the importance of GA.

Issa, a member of the House GA Caucus, spoke about the importance of Oceanside Airport—not only to him as a pilot, but to the entire district. “Without thousands of airports like this, the future of general aviation is not going to be secure,” Issa said, mentioning the importance of a new 50-year lease for the future of the airport. (Issa was featured in the June 2010 AOPA Pilot article “GA in the halls of Congress”.) 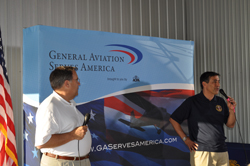 In Long Beach, about 175 people turned out at AirFlite Aviation Services, the host FBO for AOPA Aviation Summit, to find out from Fuller about the defeat of user fees on Capitol Hill (for now), alternatives to leaded avgas, Summit, and airspace. AOPA Vice President of Operations Craig Spence and Senior Director of Airspace and Modernization Heidi Williams were on hand to speak directly to individuals regarding AOPA’s opposition to the proposed change of the Long Beach airspace from Class D to Class C, and Fuller answered questions about AOPA’s work to address the problems raised for flight schools by a costly new regulation. (Read more about AOPA’s action on the regulation here.) Fuller also talked about how GA serves communities across the nation—from the Special Olympics Citation Airlift to GA pilots’ transportation of critical supplies to Haiti after the January earthquake.

Two lucky attendees at the events will get a chance to participate in an even bigger aviation event Nov. 11 through 13—Pat Cormier and Edward Story won three-day passes to AOPA Aviation Summit in Long Beach. All attendees got a sneak peek into the upcoming Summit, which will have educational forums and bring together some of the biggest names in aviation, including Patty Wagstaff, Mike Melvill, Dick Rutan, Corky Fornoff, Rod Machado, and Skip Holm.