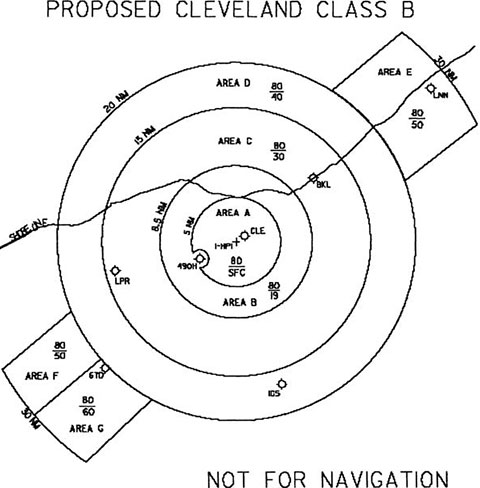 Cleveland-Hopkins International boasts one of the smallest Class B airspace areas in the country, and it will continue to hold that rank. The FAA’s proposed redesign of the airspace will keep its lateral dimension at a 20-nautical-mile radius, and its vertical limit will remain at 8,000 feet msl.

The proposed changes are minor, adding Class B sectors to the northeast and southwest of the airport in order to contain instrument approaches into the airport. The purpose of Class B airspace is to contain arrivals and departures at the primary airport and maintain separation from nonparticipating aircraft.

The FAA has worked with the aviation community to minimize the impact of the modifications to the Cleveland Class B airspace. As a result, the agency has amended its original proposal to divide the southwest Class B sector and raise the floor of the airspace in that area by 1,000 feet in order to prevent a negative impact on glider operations at Reader-Botsford Airport.

AOPA has participated in airspace meetings since the proposed redesign first surfaced from the FAA.

“AOPA appreciates the commonsense approach the FAA has adopted to include only that airspace required for containment of arrivals and departures from Cleveland,” wrote Tom Kramer, AOPA manager of air traffic services, in formal comments to the FAA June 9.

Pilots can still comment on the proposal until June 21. Comments can be submitted online; identify Docket No. FAA-2009-0514.