Get the app Get the app
News & Media Half a million strong: Pilots must stick together

Half a million strong: Pilots must stick together

When it comes to general aviation pilots’ right to travel, Sen. Charles Grassley (R-Iowa) told 100 aviators at Waterloo Regional Airport, “don’t compromise … you should be able to decide how you want to travel.” Grassley’s passionate plea to pilots came May 22 during the first of a series of GA community events sponsored by AOPA this year.

The GA community event coincided with a fly-in/drive-in pancake breakfast that drew pilots and airport neighbors despite early morning fog that prevented some from flying in as early as they had planned. AOPA selected Waterloo Regional for its first GA community event after pilot Al Carr, who is based at that airport, won an AOPA Fly-Out at Oshkosh last summer. Waterloo is one of 121 airports in Iowa. GA supports more than 2,200 jobs in Iowa and accounts for 4,000 aircraft in the state’s air transportation system.

Before an enthusiastic, committed crowd of pilots, AOPA President Craig Fuller stressed that the way to protect GA is to get engaged in improving GA safety, upgrading its image, protecting airports, and restoring the pilot population. 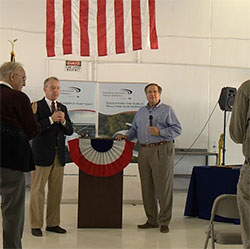 “Think of what an impact we can make—415,000 AOPA members—if we all take part,” Fuller said. “Everywhere I go I am encouraging pilots to get more engaged with general aviation.”

He noted the impact AOPA members had on GA’s big win this year—preventing user fees from entering the House and Senate FAA reauthorization bills. Grassley played an important role in that win as well. A ranking member of the Senate Finance Committee and a member of the newly formed Senate General Aviation Caucus, Grassley voted in favor of the Senate FAA reauthorization bill that excluded user fees.

During the GA community event, Grassley echoed Fuller’s call to action. “You are half a million pilots in America, and that is significant,” Grassley explained. “AOPA can’t get the job done unless you act when Craig Fuller tells you how you can help.”

In honor of Grassley’s work for GA on Capitol Hill, Fuller presented him with a Friends of Aviation award, telling Iowa plots, “Fortunately for all of us, your senior senator—Senator Charles Grassley—has been a great friend to the aviation community and continues to work on our behalf to keep general aviation strong here in Iowa and nationwide.”