Get the app Get the app
Get the latest news on coronavirus impacts on general aviation, including what AOPA is doing to protect GA, event cancellations, advice for pilots to protect themselves, and more. Read More
Already a member? Please login below for an enhanced experience. Not a member? Join today
News & Videos Aviation for the masses 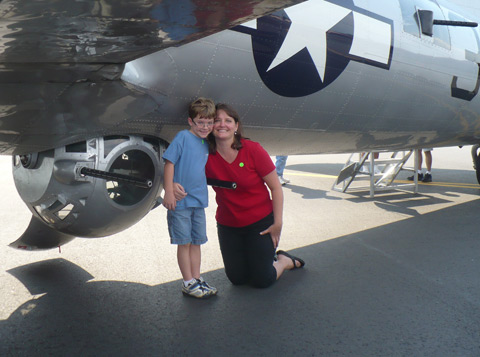 Lara Kaufmann with son Michael, age 6. Though not a pilot, Kaufmann has worked to make her local airport an everyday destination for the community.

What general aviation pilot wouldn’t jump at a chance to infuse the hometown folks with the aviator’s enthusiasm for flight? Show them why we work, wander, or just waste time around aircraft. Help them understand why we invent every excuse to give a first airplane ride, or just head over to the strip.

In Greenville, S.C., Lara Kaufmann had some ideas about that. Now she’s doing a pretty fair job of setting her personal world on fire about flying, and she’s found a willing ally in her local airport administrator.

Here’s the twist: Kaufmann isn’t a pilot. She’s a mom who was betting that if she combined some fun with some local learning (and lunch), it could make her city’s downtown airport an everyday destination for the community.

It all started with the restaurant at Greenville Downtown Airport (GMU).

Or, to be precise, the lack of a restaurant.

Having moved to Greenville from the Atlanta area, Kaufmann missed the community feeling of Peachtree-Dekalb Airport, where a family could enjoy recreational space, watch airplanes, and have a good meal at the Downwind Restaurant (billed as “The best-kept secret in town”).

Now she was in Greenville, home to the busiest general aviation airport in South Carolina, where there seemed to be nothing like that to enjoy with sons Christopher, 7, and Michael, 6.

So the Louisiana State University grad with a background in journalism, public relations, and marketing got busy. She launched wide-ranging research on community recreational facilities paired with GA airports. Then she contacted Greenville Downtown’s airport manager, Joe Frasher, and asked if anything like that might be available.

There was an observation area, he said. No restaurant. Having one would be nice.

Then, “She just went to work on it,” Frasher said. 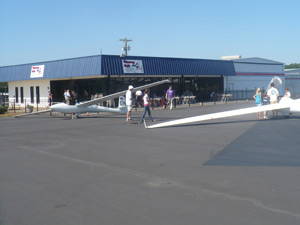 One marketing plan, more research, and countless interviews with restaurant-industry people later, Kaufmann had an operator for Greenville Downtown. In early September 2010, Mike Bliss and Lem Winesett opened the Runway Café at the site of a defunct flying school.

Aside from being a little off the beaten path, the location was ideal. Modifications—think of big storefront windows on the side of the building facing the two runways—gave great viewing of the two runways. There’s a patio outside. The building has extra capacity allowing the restaurant business to expand to serve group events some day.

Kaufmann made contacts with the local media and got the news out.  On opening day, the Runway Cafe had 175 customers at lunch.

“People are coming out in droves,” Kaufmann said in a recent interview born of her stopping by AOPA’s booth at the National Business Aviation Association’s 2010 convention in Atlanta to get acquainted. “We’re seeing that people who never knew about the airport are coming out two times a week for lunch.”

But Kaufmann wasn’t finished at GMU. There was still a playground project pending.

Sold on her energy and effectiveness, Greenville Downtown’s Airport Commission re-engaged Kaufmann for another 15 months to bring a park to life adjacent to the Runway Cafe. (You will now find Kaufmann listed on the Greenville Downtown Airport’s website as its public relations director. The website brims with historical photos, a kids’ page, and plenty of information about airplane rides and airport businesses.)

The park plan is now in a design and fundraising stage. Airport businesses are kicking in; check out the park’s Facebook page. The first donation came from Greenville Jet Center; who pledged a penny for every gallon of fuel sold at GMU until the park is finished. Another working idea is seeking a substantial donation from a corporate aviation sponsor in exchange for naming rights to the park, said Frasher.

He says the site is perfect for a park and/or playground. “It helps to make your airport a destination.”

So does the sight of a biplane parked just across the fence from the Runway Café.

The ramp at Greenville Downtown Airport. Activities at the airport have attracted children and members of the local community.

So does having an airport promoter who makes sure that airport events are well publicized and who never misses an opportunity to send a simple message: “People just need to get out there and see what’s going on.”

Asked when the park could be ready, Kaufmann responds, “It would be phenomenal if we could be breaking ground this spring.” A design idea has been posted on the park project’s web page.

Back at the Runway Café, where first-time lunch visitors are quickly becoming regular customers, social ties are forming and “it’s getting like a reunion,” Kaufman says.

Scheduled events are in the book, too:  On one fall day, 22 special needs kids were coming out for lunch and airport fun. Soon after, a group of 15 home-schooled kids was coming out.

Kaufman, who has never flown a GA aircraft, sounds just like you or me when we talk about getting people out to the field and showing them what it’s all about. And when the Experimental Aircraft Association’s B-17 dropped in for a visit, she was there, mingling with the enthusiasts. (She was the one with the camera.)

“We’re helping people understand the value of general aviation, and kids are learning to appreciate it,” Kaufman said. “It’s great how people have embraced it.”

“Everything worked out perfectly on this one, timing-wise,” he said. 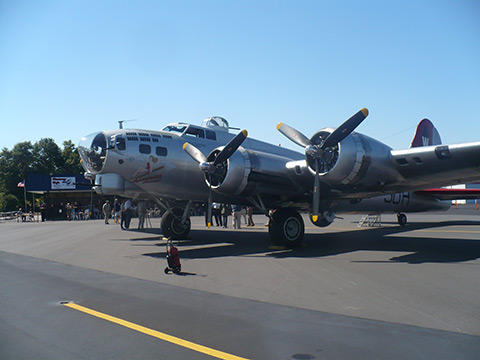 The Experimental Aircraft Association brought its Boeing B-17 Flying Fortress to the airport.