Get the app Get the app
AOPA Members DO more LEARN more SAVE more - Get MORE out of being a pilot - CLICK HERE
News & Media &lsquo;GA friendly&rsquo; Kansas City, Mo., marks airport revitalization 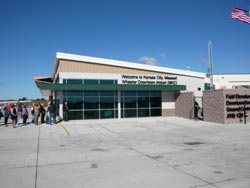 AOPA attended dedication ceremonies that marked the completion of a $90 million revitalization project at Charles B. Wheeler Downtown Airport in Kansas City, Mo., on Oct. 2. The project featured a new general aviation terminal building, construction of 96 hangars, including 12 with radiant floor heating; a self-service fuel island; and runway and taxiway rehabilitation.

Dunn said he was pleased to hear Funkhouser, who has been mayor since 2007, tell the audience that he frequently hears from GA pilots about their needs. Recognizing the economic value of GA to the community and the region, the city strives to be GA friendly, and has responded to the message from pilots.

Dunn spoke about economic value added to the region by GA, praising Kansas City for its recognition of GA’s importance to future economic development.

“At one point not too long ago, this airport was a threatened airport. With a change in city administration came a renewed understanding of the value of GA and a downtown airport,” Dunn said in an interview. He contrasted Kansas City’s policies to Chicago Mayor Richard M. Daley’s infamous “ midnight raid” in 2003 that shut down Meigs Field.

The Charles B. Wheeler Downtown Airport dedication occurred on historic ground, said Dunn – quite a contrast for an airport seen as threatened until the new city administration took office.  “This airport was a vision of Charles Lindbergh who stood in a muddy field which is now the airport and promoted aviation as a mode of transportation. It was also the early home to Howard Hughes’s TWA Airline, and served as the city’s primary airport until Kansas City International Airport opened in 1972.” 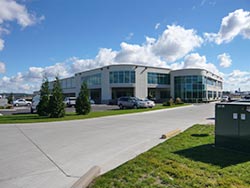 While at the airport, Dunn met with Jim Stowers III, who recently completed construction of the new Hangar10 flight services facility, and toured the premises—a state-of-the-art installation that will ultimately have a capacity of 68,000 square feet of hangar space. The first hangar and executive aviation terminal are complete. The terminal offers office space, lounges, pilot rest areas and overnight accommodations, exercise facilities with locker rooms, and meeting space. Only jet fuel is available at Hangar10.

Stowers and the facility’s general manager, Brad Chandler, are both GA pilots. Dunn told them that they should be proud of what is a first-class facility with customer service at the forefront of the facility.

Dan Namowitz has been writing for AOPA in a variety of capacities since 1991. He has been a flight instructor since 1990 and is a 35-year AOPA member.
Go to Dan Namowitz's Profile
Topics: Advocacy, ADS-B