Get the app Get the app
Already a member? Please login below for an enhanced experience. Not a member? Join today
News & Media New Diamond in the Austrian sky

New Diamond in the Austrian sky 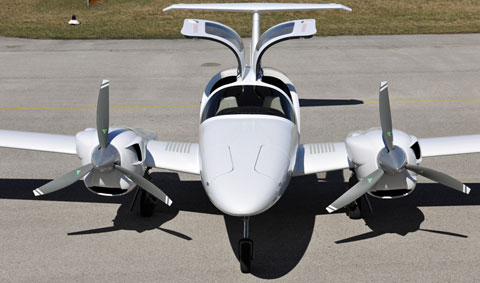 
Diamond Aircraft announced its “new flagship” has made a maiden flight April 3, carrying the company CEO and flight test chief aloft on a pair of diesel engines turning out 180 horsepower.

The DA52 posted a gear-up initial climb rate of 1,700 fpm (at 120 KIAS), reaching 12,000 feet in less than nine minutes and then cruising at 190 KTAS, according to the company announcement, which hinted that much of the new twin’s speed was held in reserve. Watch a video of the flight.

“This is the best prototype aircraft I have ever made a maiden flight with and the performance exceeded all my expectations,” President and CEO Christian Dries said in the company announcement. “I’m very proud of my team headed by Managing Director Manfred Zipper who realized this program in less than six months.”

Moving at such speed, both in the air and on its ground journey from design to prototype, suggests the new twin may owe much of its proverbial DNA to the DA40 and DA42 models, which together accounted for 142 of Diamond’s 185 aircraft shipments in 2011, according to General Aviation Manufacturers Association data.

Diamond reported the DA52 lifted off at 3,924 pounds gross, requiring a ground roll less than 1,000 feet into a 5-knot headwind with no flaps. The prototype flew with Austro Engine AE300E 180 hp turbo-diesel engines, the company reported—apparently an upgrade of the diesels matched with the DA42 NG model.

Editor’s note: AOPA Online has requested additional specifications, price, and performance information, and will update this story as details are made available.