Get the app Get the app
AOPA Members DO more LEARN more SAVE more - Get MORE out of being a pilot - CLICK HERE
News & Media Veteran airshow, race pilot Howard Pardue killed in crash 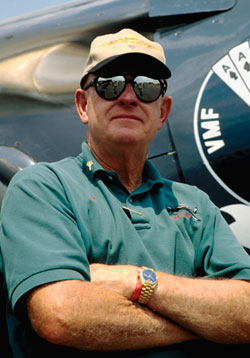 The aviation community is mourning the loss of Howard Pardue, a veteran racing and airshow pilot, who died April 4 in a crash just after takeoff from his home airport in Breckenridge, Texas. He was 77.

According to local press accounts, Pardue was flying the airplane he loved best, a vintage Grumman F8F Bearcat, which burst into flames after impact not far from the departure end of the runway. The FAA and NTSB are investigating the crash, reported around 2 p.m. CDT.

The NTSB has issued a preliminary report on the crash, which includes a statement collected from a pilot who was operating on the ground as Pardue took off. The pilot told investigators that Pardue announced he would perform a half Cuban Eight following liftoff and overfly the runway in the opposite direction.

“The witness stated that after liftoff the accident airplane climbed 100 to 200 feet in a shallow climb before it pitched-up into a near vertical climb. The airplane continued the climb in an inside loop before leveling out, inverted, about 500 feet above the runway heading the opposite direction of the takeoff,” the preliminary report states, noting it is subject to error and revision prior to the final accident report’s release. “The witness then saw the airplane's wings roll suddenly before the airplane entered a near vertical descent. The witness described the final portion of the aerobatic maneuver as a split-S, or a descending half loop, from which the airplane was unable to recover before colliding with terrain on a southeasterly heading.”

On social media and websites, tributes flowed freely for a pilot remembered for his skill in the cockpit, and capacity to inspire others. Veteran airshow and movie pilot J.W. “Corkey” Fornof said in a telephone interview that Pardue was both a close friend and “an excellent pilot.”

“He was a true enthusiast for anything that flew,” Fornof said. “A humanitarian, too: He put a lot of kids through college that didn’t have the money to do it.”

Pardue logged more than 11,000 hours in a flying career that included service in the U.S. Marine Corps, with a tour as a Naval Training Command pilot instructor. A veteran of the Reno Air Races, Pardue had a long history flying vintage warbirds, and supporting the warbird community.

Experimental Aircraft Association Communications Director Dick Knapinski said Pardue left a lasting mark through his involvement with Warbirds of America, and through the aviation museum he founded and operated: the Breckenridge Aviation Museum at his home field, Stephens County Airport. Knapinski said Pardue also was a highly respected performer at EAA AirVenture and other shows around the country.