Get the app Get the app
News & Media Cessna 421C, pilot crash in Gulf of Mexico 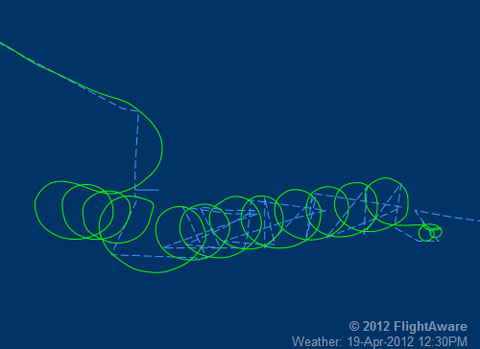 This screen capture from FlightAware shows the radar track of the Cessna 421C that crashed in the Gulf of Mexico April 19.

New Orleans National Guard pilots kept pace with a stricken Cessna 421 for hours over the Gulf of Mexico April 19 as the pressurized twin made a series of corkscrew circles toward Florida, the unresponsive pilot’s intended destination. Just after noon, about three hours after air traffic controllers lost contact with the pilot and lone occupant, the Cessna made a final descent into the Gulf, landed upright, and soon sank in 1,500 feet of water. There was no sign the pilot survived, according to the U.S. Coast Guard, which dispatched aircraft and vessels following an alert from the North American Aerospace Defense Command (NORAD).

F-15 pilots keeping pace with the stricken aircraft, which had filed a flight plan for 27,000 feet msl, reported no response from the pilot, and a layer of ice on the windows.

Officials had not yet confirmed the pilot’s identity, though published news reports identified him as a doctor with an obstetrics practice in the New Orleans area. The flight departed Slidell, La ., about 7:40 a.m. EDT, according to publicly available flight tracking services, and was headed to Sarasota, Fla.