Get the app Get the app
Already a member? Please login below for an enhanced experience. Not a member? Join today
News & Media Whiteside sets new speed records in &lsquo;Steadfast&rsquo; 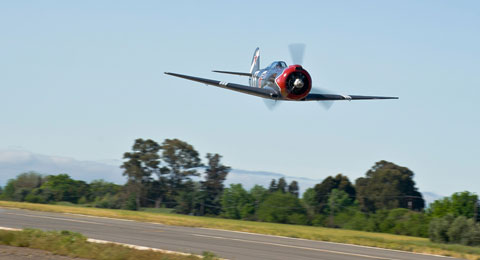 Steadfast makes a low pass over Yolo County Airport during a series of record-setting flights on April 23. Photo courtesy of Dave Leninger.


A hard day’s flying by Will Whiteside toppled four more aviation speed records on April 23, and Team Steadfast is not done yet. With friends, supporters, and a representative of the National Aeronautic Association on hand, Whiteside pushed Steadfast, his Russian Yakovlev Yak-3U racer (powered by a Pratt & Whitney R2000-7M2 engine rated at 1,750 horsepower) to record speeds over distances of three kilometers, 15 kilometers, and 100 kilometers across the California skies.

The fastest speed posted on the day, 381 mph over a 15-kilometer closed course, is well short of what Steadfast is capable of, and well beyond the 290-mph mark set in 1987 in a Piper Aerostar over Texas.

Team Steadfast set as many as four new world records on April 23, and is now taking aim at the ultimate piston performance marks. Photo courtesy of Dave Leninger.


Whiteside said in an email that Team Steadfast is working with sponsors Charlie White and Paul Leveque to build a new propeller at Stockton Propeller, while other team members and supporters are tweaking the supercharger and air induction system to produce more power at altitude. Hall of Fame pilot Lyle Shelton’s 91-second climb to 10,000 feet—described by Whiteside as the “granddaddy of all aviation performance records,” is more than 30 seconds faster than the best time clocked by Steadfast so far.

“We should know something by June whether our progress will facilitate breaking of the record in January of 2013,” Whiteside wrote.

Steadfast has toppled nine records to date, pending confirmation from the National Aeronautic Association. A.W. Greenfield, the NAA director of contests and records, confirmed in an email that four new claims from the April 23 flights have been registered and will be reviewed for approval, a process that typically requires up to 60 days to complete. Once validated, they will be forwarded to the Fédération Aéronautique Internationale for validation as world records, a process that will also require 30 to 60 days to complete. 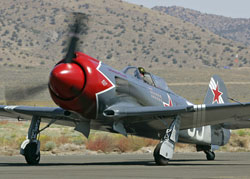 Whiteside and Team Steadfast traveled to Yolo County Airport near Sacramento, Calif., for the April 23 flights, and had to make the three-kilometer run three times because of a data recording glitch.

“This resulted in a very long day with six attempts overall for four records,” Whiteside wrote. “Flying for a record is the most intense flying I have done; doing that six times in a day is like 10 days at Reno rolled into one day,” referring to the National Championship Air Races.

Whiteside said in an interview with AOPA Online that he aims to set records, but he’s not determined to keep them. Steadfast set the most recent marks at climb power, leaving plenty of horses left to tap. He has friends building Yaks of their own, and hopes they will be tempted to beat his speeds, setting new records that he, in turn, can beat again.

“I’m really hoping those guys get the bug,” Whiteside said.

The next goal, Shelton’s 1972 time-to-climb record, will require everything Steadfast can give, and Whiteside is not ruling out a run at the ultimate piston speed record that Shelton set in 1989: 528 mph.

“With the right backing, we could go out and beat that record,” Whiteside said of the ultimate speed mark, noting it would require major modifications to Steadfast, or an entirely different aircraft. “We are looking for support.”

Whiteside said the April 23 flights were “a great warm-up” for a run at the Shelton marks, and the team is “pleased” to have set new record, even if Steadfast was nowhere near its true limits. 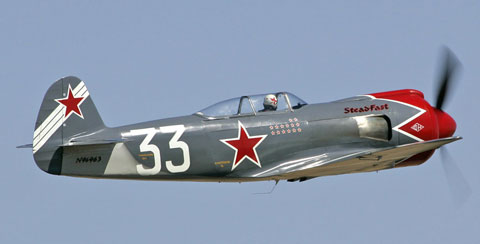 
The flights also prompted some good-natured teasing from the crew now running Rare Bear, the Grumman F8F2 Bearcat that Shelton, who died in 2010 after battling illness, used to set the records Team Steadfast hopes to break. Whiteside said Rare Bear’s team plans to make its own run at the 318 mph three-kilometer speed mark Steadfast just set. It was a sneak attack, of sorts, by Steadfast at a newly created record that officially stood at zero because the old Shelton record was set in an unlimited class that no longer exists.

A measly 318 mph. “We’re going to have to put the gear down to go that slow,” Whiteside recalls hearing from the Rare Bear crew, adding there was also discussion about flap settings appropriate to such velocity.

Whiteside noted that while the throttles may have been well short of their stops on April 23—no need to blow an engine—even a record attempt at 75-percent power requires precision flying, perfect preparation by a skilled ground crew, and a healthy dose of persistence.