Get the app Get the app
Already a member? Please login below for an enhanced experience. Not a member? Join today
News & Media Olympic visit not a cover story, this time

Olympic visit not a cover story, this time 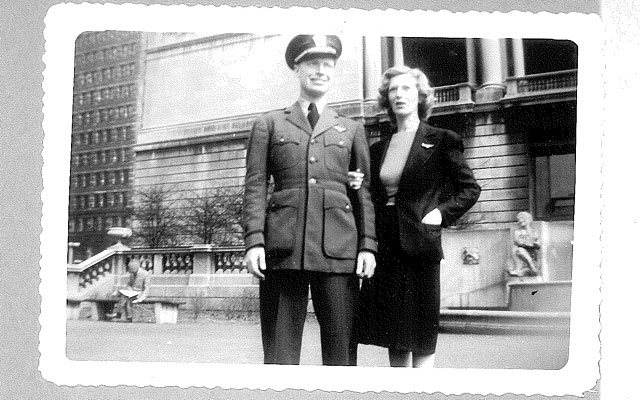 Mitchell Flint dressed in Navy aviation greens posed with his mother for a photo. Flint told her he was headed to the London Olympics in 1948, but detoured to fight for Israel. Photo courtesy of Mike Flint.

After four years of fighter combat in the Pacific, Mitchell Flint was preparing to go to war again in 1948—a decision that would not sit well with U.S. officials, who barred citizens from fighting for foreign nations, or his mother, widowed in 1939. But Israel was in desperate need of aviators to fly a ragtag collection of World War II fighters and secure its independence, and Flint cooked up a cover story: He was headed to London to see the Olympic Games.

Flint, 89, finally got a chance to make good on that itinerary, visiting London for the 2012 games with his son, Mike. In a telephone interview, Flint, a sports fan and tennis player who had studied the classics at the University of California, Berkeley, recalled a genuine desire to see the 1948 games.

“I intended to really go there,” Flint said. But Israel’s air force then amounted to three pilots, only one with combat experience. “I wanted to help Israel survive. It was the only place my Jewish compatriots were able to be welcomed to come and live.”

Flint convinced relatives in England to mail pre-written postcards home at regular intervals, and headed east—the Middle East, by way of Czechoslovakia (where he trained in the Czech version of the German Messerschmitt Bf-109, among several aircraft he would fly for Israel). His year-long combat tour for Israel included plenty of dangerous work that his mother would not have approved of.

Flint recalled bombing Egyptian troops commanded by Col. Gamal Abdel Nasser (a future president of Egypt) in the Fallujah Pocket in the Negev. Equipment reliability was an issue in this fledgling air force.

“These bombs did not always leave the airplane,” Flint recalled. 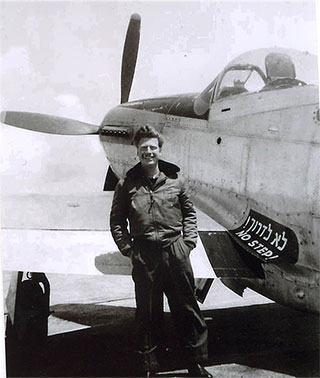 Mitchell Flint flew several aircraft for Israel, including the P-51 Mustang seen here, the Corsair, Spitfire, and a Czechoslovakian version of the Messerschmitt Bf-109. Photo courtesy of Mike Flint.

Two days after a compatriot was nearly blown to bits by a bomb that clung until touchdown, Flint found himself in an identical jam. He tried pulling Gs to shake the armed bomb loose, several times, with no luck.

“I didn’t like to ditch. I had ditched once in the Pacific, and I was very lucky to be picked up,” Flint said. “It’s dangerous.”

And with Israel struggling to arm itself, you “hate to lose an airplane,” Flint added.

A very smooth landing allowed Flint to survive to serve the U.S. Navy once again in Korea. Six decades later, Flint returned to London to see the Olympics there at last.

Flint saw many events, including the U.S. women’s soccer victory over Japan for the gold medal. There was no doubt which team he was pulling for.

“I was a fighter pilot against the Japanese… I was really pulling for the Yankees,” Flint said. “They pulled it off.”

Flint had a front-row seat for the closing ceremonies, and thoroughly enjoyed the spectacle.

“Everybody was swaying with the music,” Flint said. “Usually, I don’t sway like that, but it got me going.”

Flint’s son, Mike, is a Hollywood producer working on a documentary, Angels in the Sky , to tell the story of the birth of a nation’s air force, and the men like his father who converged from around the world to fight for Israel’s independence.

The younger Flint said his father’s ruse—telling his mother he was headed somewhere other than combat duty—was not uncommon. In fact, it was a tactic nearly universal among Israel’s first combat pilots.

“It was a higher calling,” Mike Flint said. “They all lied to mom.”

Editor-Web
Editor-Web Jim Moore joined AOPA in 2011 and is an instrument-rated private pilot, as well as a certificated remote pilot, who enjoys competition aerobatics and flying drones.
Go to Jim Moore's Profile
Topics: Around the World Flight, Travel