Get the app Get the app
Already a member? Please login below for an enhanced experience. Not a member? Join today
News & Media NTSB: Reno crash pilot subjected to 17.3 Gs during upset 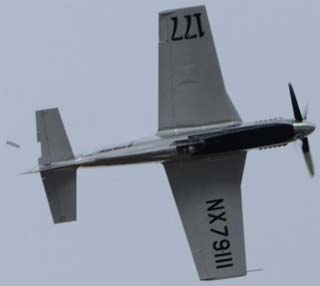 A spectator’s photo of the Galloping Ghost, one of many released by NTSB Aug. 21, shows the left elevator trim tab detaching from the P-51 just after the aircraft and pilot were subjected to a 17.3-G acceleration.

The NTSB has not yet reached final conclusions on the fatal 2011 crash at the National Championship Air Races in Reno, Nev., though a detailed analysis of a spectator’s video just released concludes that P-51 Mustang pilot Jimmy Leeward suffered a sudden acceleration of 17.3 Gs in the final seconds of the flight that took his life—along with 10 spectators on the ground.

Leeward, at the controls of the modified Mustang dubbed Galloping Ghost, was making a steep left turn toward the home pylon when the P-51 suddenly rolled from 70 degrees to 93 degrees of bank, and then quickly pitched up. A detailed analysis of spectator photos taken during Leeward’s final lap showed the left elevator trim tab detached after the G-load increased, less than two seconds after the P-51 reached maximum vertical acceleration.

The NTSB offers no conclusions in more than 900 pages of documents and photographs released Aug. 21. The NTSB announced Aug. 23 that the board will convene Aug. 27 to rule on the probable cause of the crash. The agency made several recommendations to improve the safety of pilots and spectators earlier this year, including course modifications and G-load training for race pilots. The Reno Air Racing Association is seeking donations to help cover a $1.7 million increase in the insurance premium for the 2012 races, scheduled for Sept. 12 through 16.

A message on the website states the premium must be fully paid by Sept. 1, though a contest official said there is no danger the race will be canceled or curtailed by insurance issues.