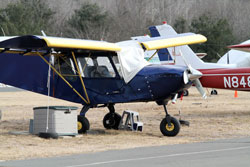 Dan McKeeman, a member of the flying club that operates Simsbury Airport in Connecticut, said he is counting on a successful petition by AOPA and EAA to allow him to fly on a driver’s license medical standard.

The airport in Simsbury, Conn., is home to about 50 pilots who share the cost of maintaining their home field. There is strong support here for the petition about to be filed by AOPA and the Experimental Aircraft Association that will seek to extend to all pilots the ability to fly four-seat aircraft—with single engines up to 180 horsepower—without a third-class medical certificate.

For this airport, in the long term, it may be a question of survival.

Simsbury Airport is rented from investors, and the tiedown fees and membership dues paid by pilots accounts for much of the operating budget. A fly-in and car show held each September generates thousands of dollars; various businesses rent space in the clubhouse and hangars. Still, the pilots spend roughly twice what they would at other nearby airports for hangar or tiedown space.

Simsbury Airport Manager Bill Thomas traded an RV-6 for a Jabiru LSA about a year ago and said it was a transition that took some getting used to.


Losing even one pilot can make a difference; losing several would be a disaster. More than one pilot here has had to struggle to retain a medical certificate. Bill Thomas, the airport manager, opted to transition from familiar four-seat aircraft to a much lighter LSA. Thomas said that was a difficult but manageable proposition.

“When we lose a pilot you know because their blood pressure’s a little too high, they’ve got to hang up the wings, it really affects our ability to maintain the airport, keep it going,” said Brad Griswold, a member of the flying club. 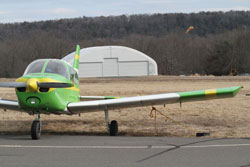 Many of the aircraft based at Simsbury Airport, including this four-seat Piper, could be flown with a driver’s license medical self-certification if the FAA accepts a petition to be filed soon by AOPA and EAA.

Retired U.S. Air Force Col. Joseph Bellino has logged thousands of hours in a decades-long flying career. Bellino holds many advanced ratings, but at age 67 feels he is “far too old” to pilot advanced aircraft in IMC. Recreational flying, the occasional $100 hamburger, or a trip to the beach is all he’s interested in now. Though Bellino’s health is good, “every two years, it’s a wonder” whether something will come up that puts a third-class medical out of reach, he said, either by ruling it out entirely or making the process too time-consuming and costly to be worthwhile. Bellino, who is also the air boss of the annual fly-in, said he will support the coming petition “150 percent.”

At the 2011 AOPA Aviation Summitt, AOPA and EAA jointly announced a new effort to expand the driver’s license medical standard that sport pilots have safely flown under since 2004. The petition seeks FAA approval to allow pilots like Bellino to fly four-seat aircraft with a single passenger in daytime VFR conditions. The petition is now in the final stages of preparation, with great care being taken to make the strongest possible case to the FAA, which has turned down similar efforts in the past. 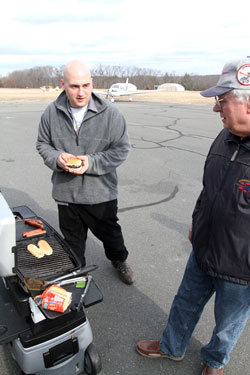 The petition will note that in eight years of sport pilot aviation, there have been no identifiable accidents attributed to pilot medical issues.

AOPA and EAA will include in the petition a request that the FAA consider the safety benefit of allowing pilots to continue flying the aircraft with which they are most familiar.

Thomas said the flying club’s membership has remained relatively stable over the years, though many of the pilots are advancing in age. There is a possibility that a decline in pilots could endanger the airport’s existence.

“The theoretical answer is, yes,” Thomas said. “I can think of several people who left flying.”

The petition, if adopted as presented to the FAA, would lead to the creation of a medical course that pilots could take online, covering basic medical considerations and allowing pilots to make sound decisions about their fitness for each flight. Many pilots in Simsbury noted that there are long gaps between aviation medical exams, and they are already self-certifying their fitness before each flight.

Pilots around the country will soon have a chance to make their voices heard to the FAA. AOPA and EAA will call on members to support the petition when the time comes; updates will be posted on AOPA Online.