Mass arrivals make Oshkosh their own

Building a neighborhood in the North 40

Cessnas line up at Dodge County Airport for a showcase flight July 20.

The airport beacon swept green and white light across the tent wall, dimly illuminating a mattress pad and what luggage would fit in the back of a Cessna 172. Outside, laughter mixed with stories of maintenance and modifications. It was days before “The World’s Greatest Aviation Celebration” in Oshkosh, Wis., but the party started early here at Dodge County Airport in nearby Juneau, Wis. Pilots camped near their airplanes at the airport, where they would stage a mass arrival of 41 Cessnas at EAA AirVenture July 21.

Cessnas 2 Oshkosh is one of several mass arrival groups to make the fly-in their own by building a community of like aircraft and their owners in the general aviation camping area, commonly known as the North 40. Many participants said the thought of skipping the busy VFR arrival via Ripon and Fisk enticed them to join the mass arrival, but the camaraderie keeps them coming back.

Aircraft converged on the RIPON waypoint at Ripon, Wis., to the southwest of Oshkosh, the morning of July 21, falling into line for the VFR arrival via Fisk, Wis., 10 miles farther northeast. Air traffic controllers handled the sequencing deftly, but the high-traffic arrival can be stressful for pilots trying to keep track of the aircraft around them and maintain separation.

A controller asked a red-and-white Citabria if he was a flight of two. 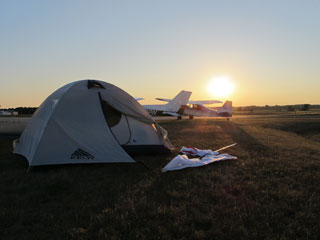 Participants camped with their airplanes at Dodge County Airport in Juneau, Wis., in preparation for the Cessnas 2 Oshkosh mass arrival.

The mass arrivals are not immune to unexpected traffic—a Piper Cub landed between aircraft in one element on a showcase flight July 20—but ATC reserves a block of time for each mass arrival. As the 41 Cessnas approached the field later that day, a high-wing aircraft passed over their flight path, turned toward Oshkosh, and then beat a retreat, apparently directed by ATC. Many of the formation pilots said that they prefer the straightforward mass arrival, with elements of three that move to trail on final approach, to the stress of other arrivals, even though it requires more preparation: Everyone participating has practiced with a group at a formation clinic, the airwaves are quieter, and each pilot focuses on his aviating tasks.

While they fly in from across the United States and parts of Canada and come from different backgrounds, the pilots are tied together by a common interest: “We’ve all been bitten by the airplane bug, and we all fly Cessnas,” said organizer and Cessna 310 pilot Rodney Swanson.

Participants meet a few fellow pilots at a training clinic in their area and fall into easy conversation about technique or their aircraft’s recent upgrades. They meet more pilots preparing at Juneau, and when the airplanes shut down in Oshkosh they have a week to camp out, talk, form new friendships, and enjoy a reunion with old friends.

Pensacola, Fla., pilot Ted Beumer said he got involved with Cessnas 2 Oshkosh after looking at the pages-long notam for AirVenture, finding it intimidating as a then-120-hour pilot. Now in his fourth year flying the mass arrival, he said the camaraderie with fellow pilots draws him back each year. 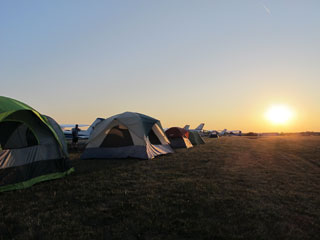 “If I didn’t make it for this—if I got weathered and missed the arrival—I wouldn’t bother with Oshkosh,” he said.

Several participants recalled the year of “Sloshkosh,” when heavy rains prevented the group from parking their aircraft in the North 40. They flew the formation arrival anyway, overflying the field and returning to Juneau. The pilots then returned to the AirVenture grounds by road.

Steve and Julie Wolf, who manned the registration desk at Juneau, fly their Cessna 182 and said Cessnas 2 Oshkosh has become a sort of reunion for them. While Julie is not a pilot, she said she enjoys spending time with the other participants, people watching, and especially listening to the hangar flying—even though she doesn’t understand the jargon.

“In 2005 when I got her here, she said, ‘I could probably do this every three years,’” Steve said. Now that they participate in the mass arrival, they come every year. In 2008, the couple stopped at Oshkosh after they had sold their house in New Jersey and before they had moved into a new one in Colorado.

For one week a year, the grass south and west of Runway 9/27 at Wittman Regional Airport transforms into a city of tents. Seemingly endless rows of aircraft in the North 40 are a familiar sight to AirVenture attendees, but generally you can’t pick your neighbors: Pilots who arrive an hour apart could end up at completely different sections of the grounds. Mass arrivals offer a solution. 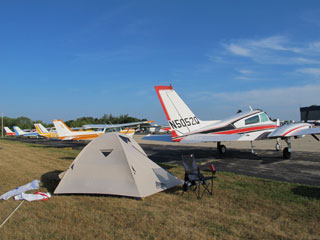 Swanson said he and his brother used to fly to AirVenture together, but one year got separated and were parked separately. Because each had loaded his airplane with half the camping gear, they had to haul their gear across the camping area to set up together. Later, after organizing a fly-in of Cessnas to Robins Air Force Base and talking to participants about meeting at Oshkosh, he was faced with the dilemma again of how to ensure they could park together. The long-running Bonanzas 2 Oshkosh group provided inspiration.

An Army helicopter pilot, Swanson drew from his formation flying experience to organize the first Cessnas 2 Oshkosh arrival with another pilot in 2006; now he is one of a triad of organizers, with Cessna 172 pilots Craig Chipley and Gil Velez.

Mass arrivals this year included Beech Bonanzas, Piper Cherokees, Mooneys, Van’s RVs, and Piper Cubs, the latter in honor of the J-3’s seventy-fifth anniversary. Many have looked to Bonanzas 2 Oshkosh, the elder statesmen of AirVenture mass arrivals, for guidance. The Cessna and Bonanza groups often have group tents near one another, and some evenings send the children to one tent for movies and the adults to the other tent for beer.

Swanson said the community in the North 40 has come to mean more to participants than the exhibits and airshows. While the show is great, he said, “It’s not about Oshkosh anymore. It’s about the group.”