Get the app Get the app
AOPA will be closing at 3:15pm ET Thursday, December 1st. We will reopen Friday morning at 8:30am ET.
AOPA Members DO more LEARN more SAVE more - Get MORE out of being a pilot - CLICK HERE
News & Media GA leaders laud industry efforts on working together 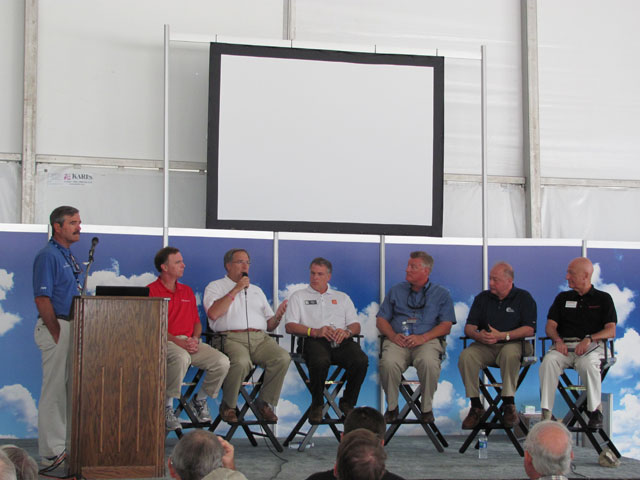 The heads of the general aviation organizations used a panel discussion to discuss how their efforts to work more closely together are paying off. On stage were AOPA’s Craig Fuller, Ed Bolen of the National Business Aviation Association, Rod Hightower of the Experimental Aircraft Association, Pete Bunce of the General Aviation Manufacturers Association, Matt Zuccaro of the Helicopter Association International and Henry Ogrodzinski of the National Association of State Aviation Officials, moderated by EAA Director of Publications Mac McClellan.

McClellan kicked off the session by asking each of the GA leaders what issue was in the forefront for them and their members. “What we’re really worried about is the declining pilot population,” said Fuller. “I give credit to EAA for their efforts to bring young people into flying through its Young Eagles program. But our research finds that up to 80 percent of those who become student pilots never finish.” AOPA studied the issue and found 47 factors that contribute to successful flight training, he added.

“We spent a year talking to the flight training community and helped create field guides for students, flight schools, and instructors to make the experience better,” said Fuller. “It will take time, but we all need to work together to address our shrinking pilot population.”

Hightower lauded the leaders on stage for working together in the past year on efforts to protect the freedom to fly and support flying of all types. “We have a tremendous passion for flying and we want to get more people into aviation,” he said. “The Young Eagles program is celebrating 20 years. We’ve had 1.7 million kids in the program during that time.”

Zuccaro spoke about repeated efforts by Sen. Chuck Schumer (D-N.Y.) to mandate the use of an over-the-water North Shore helicopter route in New York into the FAA reauthorization bill and the highway bill. The senator finally went to the White House and got a public regulation imposed that goes into effect next month. “They came after us, and they will come after you next,” he warned.

Looking back at last year’s panel, the discussion was about FAA reauthorization and the need to defeat user fees, said Bolen. “A year later, we’ve proved that stronger together works. We were able to get a rule that allowed for flight tracking defeated and the final FAA reauthorization bill had no user fees in it,” he said.

Ogrodzinski warned of the current state of airports as pressure on spending less continues to grow. “NASAO found that states need to spend $4.4 billion on airports, but Congress only gave us $3.3 billion, which is inadequate,” he said.

A pressing issue for GAMA is the impediment of owning and flying aircraft, said Bunce. “The average age for a general aviation aircraft is 42, which is way too old,” he said. “But the FAA certification process is holding things up. We want to get technology in the cockpit faster.”