Get the app Get the app
Already a member? Please login below for an enhanced experience. Not a member? Join today
News & Media 'Racing Aces' win Air Race Classic 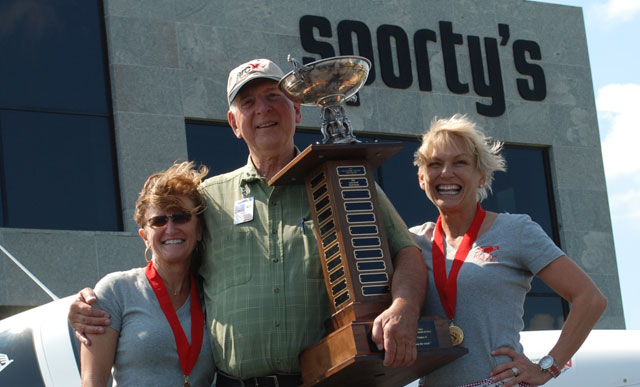 Two Texas pilots who go by the name of the Racing Aces have won the 2012 Air Race Classic.

Dianna Stanger, a fixed-base operator and manager of the Calhoun County Airport, and Victoria Holt, a professional pilot from Belton, flew a Cirrus SR22 to victory in the four-day race that began June 19 in Lake Havasu City, Ariz., and concluded June 22 at Clermont County Airport in Batavia, Ohio.

Fifty-five teams participated in the all-women’s air race that has been an aviation tradition since 1929, when the event was known as the First Women’s Air Derby. AOPA was a “full throttle” sponsor of the 2012 Air Race Classic. 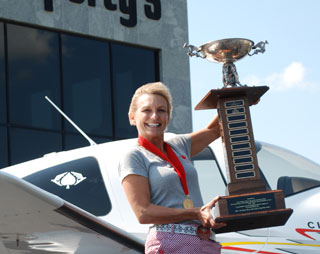 Stanger and Holt, who flew the race in 2011 were declared the 2012 winners when organizers determined that the team had achieved the best groundspeed measured against a handicap speed computed for each aircraft based on flight-test data. Flying under day VFR conditions, all 55 flight crews crossed the finish line at Clermont County before the last day’s deadline of 5 p.m., said Linda Moody of the Air Race Classic organization. Moody also flew the race, piloting a Piper PA-28-140E Cherokee with teammate Judy Snow. The last aircraft to land, a Cessna 172, touched down minutes before the cutoff, she said.

Checking “every weather resource a pilot can think of” before deciding on altitudes for flight legs, winners Stanger and Holt—who fly together professionally as the crew of a Hawker Beechcraft Premier jet—managed to find tailwinds on all nine flight legs, including the segments that took them in westerly directions, said Holt in a phone interview.

The speed of their aircraft, which turned in true airspeeds in the 180-knot range, and a decision to carry full fuel rather than “trip fuel” created options that enabled them to be in position to take advantage of southerly air flow before the passage of a cold front, and northwesterly flows after frontal passage.

“That was our ace,” Holt said.

The strategy worked despite their having to sit out the entire second day of the VFR-only race for weather. That racing plan would not have been available to them in a slower aircraft such as the Aviat Husky they flew in the 2011 race.

“It was fun. It was like a game,” said Stanger. “Fantastic scenery, great people. We were like tourists looking out the window.”

Holt added that the race was also a great adventure for the collegiate teams that took on the 2,700-mile trek.

“It’s a fantastic experience, getting together with people and bonding with people as you go along,” she said. Winning the race takes “a little bit of luck and a lot of talent.”

Flying a 150-horsepower Cherokee, Moody and Snow faced such challenges as 9,600-foot density altitude conditions in Gallup, N.M. They opted to spend the night and depart the next morning, when lower temperatures would give their aircraft better performance in the climb to cruise altitude. 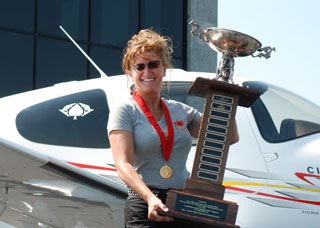 Stanger and Holt got off to a strong start, covering more than half the race course on Day One.

When weather posed problems for many of the racing teams as they made their way east—especially in Michigan, several flight teams had to wait for a low overcast above Sault Ste. Marie to lift.

The Racing Aces departed Chippewa County International Airport in Sault Ste. Marie, on the last morning of the race “later than a handful of racers but the move was strategic and beneficial,” they said. They “flew the last two legs in a matter of hours,” checked in with event officials “and headed to the ARC Meltdown Party.”

Sporty’s Pilot Shop, headquartered at Clermont County Airport and a major race sponsor, hosted a hangar party and dinner featuring musical entertainment by students from the University of Cincinnati’s College Conservatory of Music, “a special operatic performance arranged by one of Sporty’s flight instructors who also is a professor of voice at CCM,” and fireworks, said Sporty’s in a news release.

Asked if the winners plan to enter the race again next year, Stanger answered, “Of course we are.”

In the mentime, the Racing Aces will remain focused on increasing the ranks of women pilots, and continuing their advocacy of scholarships and education funding “for girls who can’t afford an education in aviation,” Stanger said.