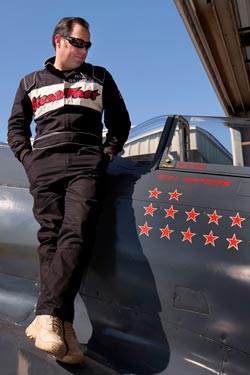 Whiteside set a world speed record in October, piloting SteadFast at an average speed of 416 mph over Runway 8/26 at Wendover Airport in Utah. The National Aeronautic Association will honor Whiteside March 13, along with other new record-setters, for setting the U.S. speed record in a piston aircraft weighing between 3,858 and 6,414 pounds.

On Feb. 29, Whiteside took aim at a time-to-climb record set in 1978, when Russell H. Hancock flew a Piper Navajo Panther to 3,000 meters (about 10,000 feet) in 3 minutes, 33 seconds. The Yak-3 made the same climb in 2 minutes, 03 seconds, and Whiteside went on to break the record for a 20,000-foot climb at the same weight. Whiteside’s team then added weight, and shattered records for climbs to the same altitudes again.

The ultimate world record for a climb to 3,000 meters stands at 91.6 seconds, set in 1972 by Lyle Shelton in a modified Grumman F8F Bearcat. Whiteside was coy about whether that record may also be in danger.

“That’s the granddaddy of all of them, that and the three-kilometer speed record he set in 1989,” Whiteside said.

Whiteside is a veteran of the Reno Air Races, and named his Yak-3 for Reno/Stead Field, where the races are held—and the speed at which it travels. SteadFast was built in Russia in 2005 (the last piston fighter produced there). The time-to-climb records were set on a series of three flights out of Charles M. Schulz— Sonoma County Airport in Santa Rosa, Calif.

“We didn’t really have optimum conditions,” Whiteside said. “We know we have a lot left on the table.”

A larger propeller will be mounted for upcoming flights. Whiteside said his record-setting ways are driven by a simple motive: “I love to compete,” Whiteside said. “That’s pretty much it.”