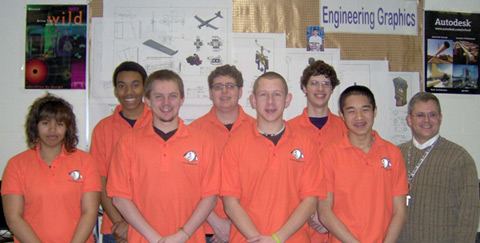 High school students from 39 states and U.S. territories have risen to the challenge of designing a light sport aircraft able to fly two people 200 miles in two hours or less at 1,000 feet agl or more. The Real World Design Challenge is a public-private partnership that puts professional-grade design software in the hands of students, and matches them with industry mentors and other resources. The goal is to inspire interest in science, technology, engineering, and math (STEM) careers.

A Las Vegas high school team opted to go electric, and questions they posed to the FAA prompted the agency to start developing standards for aircraft batteries and electric powerplants, according to the Las Vegas Review Journal . The seven-member team from the Frederick County Career and Technology Center caught wind of the program just before the November registration deadline and worked fast to get up to speed on the $1 million package of design software provided to each team for the competition. Competition organizers also provide teacher training and contacts with aeronautical engineering professionals who advise the teams.

“It’s a sizeable hill to climb,” said their teacher, Phil Arnold. “We signed up on the last day.”

Undaunted by the looming Feb. 6 submission deadline, the students set to work choosing a combination of fuselage and powerplant designs specified in the rules. With those options limited, the focus of the state-level design challenge is wing geometry, which must be produced from a clean sheet and tested using software simulators in an electronic wind tunnel.

“What they started with was pretty radical,” Arnold said. “They were talking about a dual wing that was kind of stair-stepped and inflated … not sure where they were going with it. They had some really wild ideas.”

Through research and collaboration, the students zeroed in on a solution that tested well and earned them an invitation to the national finals, where they will attempt to unseat the reigning champions from Connecticut in April.

Designs that won state-level competitions must be refined for a more difficult challenge: a longer flight that puts a greater emphasis on fuel economy.

“No one can just resubmit their state entry,” Arnold said. Students across the country are busy crunching fresh sets of numbers, with an April 9 deadline to submit designs for the national finals. Winning teams get an all-expenses-paid trip to the nation’s capital.

Arnold said three of his students—senior Spencer Korb, and juniors Garrett Radtke and Troy Grove—have been pushing hardest to get the work done.

“The gung-ho boys have already said, ‘Mr. Arnold, are you going away for spring break? We could really use a little more time in the CAD lab,’” Arnold said, noting that Radtke and Korb have already decided on engineering careers. “These guys really are passionate about it.”