Get the app Get the app
AOPA will be closed July 4th, in observance of the Independence Day holiday. We will reopen at 8:30 am ET on Tuesday, July 5.
News & Media Ascension Air offers fractional Cirrus ownership, financing 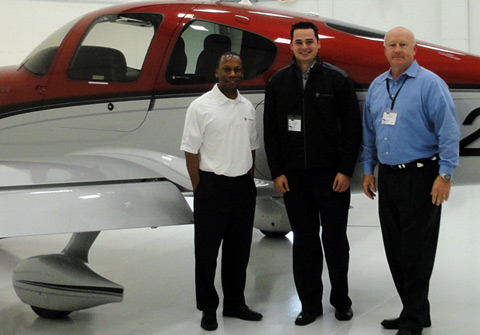 From left, Ascension Air President and CEO Jamail Larkins, Director of Operations Danny Gizzi, and Sales Director Steve Booth seen with one of their new Cirrus SR22T aircraft. Founded in 2004, the company was ranked the top firm in the country run by a young executive in 2009 by Inc. Magazine. Photo courtesy of Ascension Air.

Ascension Air has joined the fractional ownership market, offering a fleet of three new Cirrus SR22T aircraft based in Atlanta—with hopes to expand to other airports by year’s end.

The aircraft—a matched set—are equipped for travel, with a glass cockpit (Cirrus Perspective by Garmin), CAV Aerospace icing protection (a TKS weeping wing system certified for flight into known icing), and seating for up to five (provided at least two are children) with the 60-40 fold-down rear seat Cirrus introduced for 2012. They are the top-of-the-Cirrus-piston-line, fully loaded aircraft being sold in fractions.

Electronic Stability and Protection, Enhanced Vision System, air conditioning, and the Cirrus Airframe Parachute System are also standard features of all three aircraft, which have identical equipment—including paint—to facilitate a seamless transition for owners. A fractional owner may fly any of the aircraft out of Dekalb- Peachtree Airport at any given time.

"Ascension is the business launch customer for our latest model," said Cirrus Aircraft Executive Vice President Sales and Marketing Todd Simmons in a news release. "Ascension has our strongest support as it brings this new personal and small-business travel alternative to the market place.”

Ascension Air President and CEO Jamail Larkins said his company worked with three banks to develop a financing program with unique features, including protection for fractional owners in case other members default. The loans are secured by each individual share, and banks will not repossess aircraft in case of financial trouble.

“We’ve got some skin in the game that’s allowed this to happen,” Larkins said. “Something that’s brand new for piston fractional ownership.”

One of the three new (and identical) Cirrus SR22T aircraft being sold in fractions by Ascension Air.

“Legally, you’re still required to do your own preflight,” Larkins said. But the deal even includes headsets, and “if the tires are low, we’ve already put air inside of them.”

Ascension, working to break into a crowded field of fractional aircraft operators and sellers, is offering a discount on the down payment for early adopters: The company will pay $9,500 of the typical $18,000 down payment (20 percent of the $720,000 sticker price). Early adopters can slide into the left seat for $8,500 up front, with interest rates in the 7- to 8-percent range, depending on qualification and bank. Fixed costs will total about $2,000 per month, including finance charges, concierge service, and maintenance. The company has priced the deal to compete with full ownership of older aircraft, offering a state-of-the-art GA experience for a cost that’s nearly the same as owning a 30-year-old Cessna 182, Larkins said, noting that aircraft will typically come with analog instruments and no ability to fly into known icing conditions.

Each fraction comes with a 48-month contract, at which time the aircraft is sold and the owners divvy up the net return, estimated to be around $5,000 to $6,000 more, per owner, than is required to pay off the loan balance.

Larkins said 12 owners have already bought into the fleet of three SR22Ts, and when the fractions are fully sold, owners can expect a roughly 90-percent availability rate—meaning nine times out of 10, the aircraft will be there when an owner wants to fly it. Scheduling is handled with an iPhone application.

Larkins said the company plans to expand to other airport locations around the country, starting later this year.