Get the app Get the app
AOPA will be closed July 4th, in observance of the Independence Day holiday. We will reopen at 8:30 am ET on Tuesday, July 5.
News & Media Cessna employees raise $25,000 for injured vets 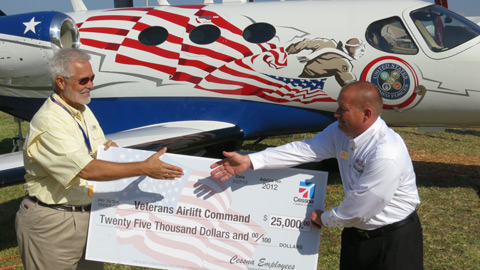 You may have seen pictures since late in 2011 of a patriotically decorated Citation Mustang that Cessna Aircraft Co. donated to the Veterans Airlift Command. Its purpose is to bring together injured veterans with their families. The veterans are recuperating sometimes hundreds of miles from their families. 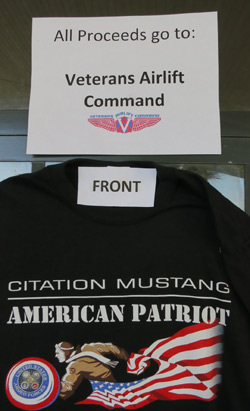 When Cessna employees saw the aircraft, designated “American Patriot” with its paint scheme featuring a heroic character dubbed Patriot Defender, they decided on their own to raise money to expand the Veterans Airlift Command (VAC) effort. They sold more than 2,000 T shirts featuring the command and, of course, the Mustang they built and painted that has now completed seven missions. Who did they sell the T-shirts to? Themselves, until they had $25,000. There were no sales outside the factory.

Veterans Airlift Command Air Boss Walt Fricke was stunned. “I thought Cessna must have kicked in, but no, it was all employees.” Fricke, shown on the left in the photo, received the check from Cessna’s Brian Rohloff, the business leader for the M2 and Mustang.

The character on the aircraft looks much like Hollywood’s Captain America, but Cessna carefully designed, named, and copyrighted it to avoid conflict with the movie hero. 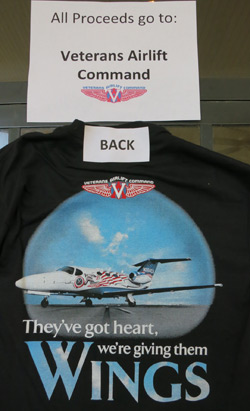 "We wanted to demonstrate the pride we felt in the Citation Mustang product, and also wanted to figure out a way to show support for the VAC and their mission," said Ashley Parks, Cessna employee and project coordinator for the American Patriot T-shirt fundraising campaign.

On March 31, Cessna’s aircraft will transport Sgt. Adam Kisielewski of Frederick, Md., to Sun 'n Fun in Lakeland, Fla. His numerous wounds required extensive treatment at the National Naval Medical Center as well as at Walter Reed Army Medical Center, and resulted in 14 months of recovery. Kisielewski was medically retired from the U.S. Marine Corps and has since worked as a project officer for the U.S. Army's Telemedicine and Advanced Technology Research Center at Fort Detrick in Frederick. He is also a student pilot and has soloed a Flight Design CTLS.

If you would like to expand the employee effort by buying one of the T-shirts, contact Andy Woodward, Cessna manager of external relations. While Cessna is certainly not a T-shirt company, Woodward promised he will find a way to deal with purchases by the public.