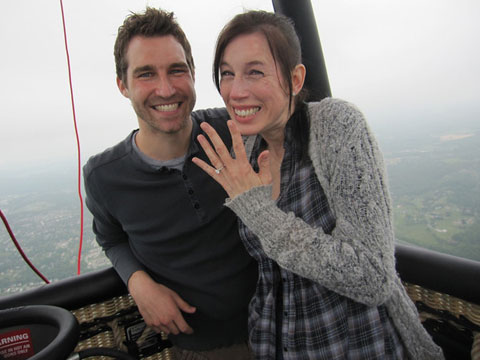 Matt Deskiewicz and Pamela Liptak became engaged May 6, high in the skies over Frederick, Md., in a hot air balloon operated by Tailwinds Over Frederick. Photo courtesy of Tailwinds flight crew.


He’s a young creative director, and she’s in the business as well. They met on a television shoot, romance budding under bright lights, and on May 6 they took to the skies over Frederick, Md., in a hot air balloon.

Pamela Liptak learned the true purpose of Matt Deskiewicz’s mission in the middle of the flight, as he dropped to one knee, offered a ring, and asked her to be his wife. She said yes. 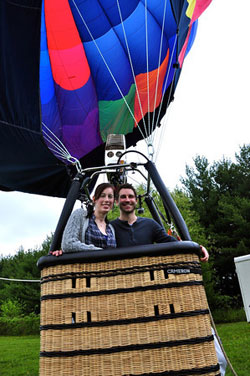 “She was just head over heels over the entire event,” said Deskiewicz, noting that Liptak had yearned for lighter-than-air flight since childhood. “Pamela has been talking about, for a very long time, going up for a ride in a hot air balloon.”

Patrick Smith, an accomplished aviator in powered aircraft, got the balloon bug in 2010, and quickly earned his commercial lighter-than-air certificate. Last year, the Smith family launched the new business Tailwinds Over Frederick, offering one-hour rides for $250, with up to four passengers, along with more private “sweetheart” flights like the one launched May 6 with two special passengers.

“This was a really cool experience for us, because this was our first proposal in the balloon,” Smith said. With a video camera capturing the moment, Smith did his best to stay clear of the action—no easy task in a gondola built for up to six (slim) people.

Smith learned of the true nature of the mission on departure day, so it was a surprise to the pilot as well as the bride-to-be.

Deskiewicz said the couple plans more flights, and may work a balloon theme into the wedding. They plan to aim for an autumn ceremony, though the details are still somewhat up in the air.

Deskiewicz first contacted Smith in December, but had to bide his time before launching the special flight. That, he said, helped ease the nervousness he felt as he contemplated the major step.

“Because the weather this spring hasn’t been so cooperative, I actually had a few months to prepare,” Deskiewicz said. “Once we got up in the air, and actually were having so much fun, everything fell into place and it came out very natural.” 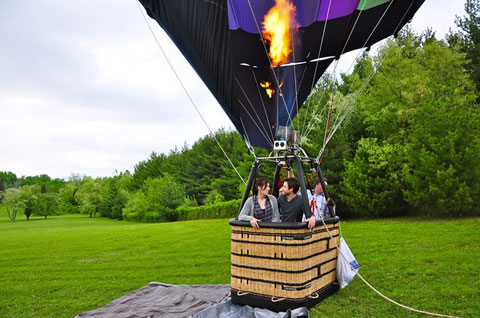