Get the app Get the app
Already a member? Please login below for an enhanced experience. Not a member? Join today
News & Media Strong launch sustains pilot club 50 years later 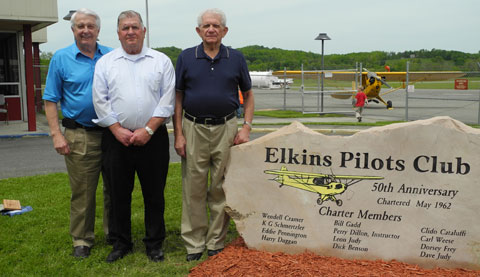 
One instructor, one Piper J-3 Cub, 27 solos, and more than 100 students in the first 12 months. The Elkins Pilots Club started with a bang 50 years ago and has continued ever since. The club celebrated the milestone anniversary May 12 with a fly-in at the Elkins-Randolph County-Jennings Randolph Field in West Virginia. Two of the club’s original members and the first flight instructor unveiled a stone monument commemorating the founding of the club.

Speaking at the event, club member Craig Hyre told the story of the founding in 1962 when avgas cost 20 cents a gallon, airplanes rented for $6 an hour, and flight instruction cost $4 an hour. The club’s original Cub is still on the field and was front and center at the event. Each of the 11 founding members invested $100 to launch the enterprise. Since then hundreds of pilots have flown the club’s airplanes, which today include a Cessna 172 and a Piper Archer II. The airplanes rent for $70 an hour; instruction is $35 an hour.

The AOPA Tougher than a Tornado Sweepstakes made an appearance at the event, as did AOPA President Craig Fuller, arriving in his own Husky. Addressing the crowd, Fuller thanked Sen. Joe Manchin of West Virginia for his support of GA. Manchin is an AOPA member and active pilot who frequents Elkins. One of the airplanes on display at the event was the state’s Cessna Caravan, which Manchin regularly flew as governor. Manchin is a member of the Senate GA Caucus. Fuller pointed out the importance of such large caucuses in the House and Senate and the effectiveness of the bodies in supporting GA causes.

Fuller also recognized the importance of flying clubs in supporting the growth of GA, providing lower-cost access to airplanes and flight training and encouraging social connections among pilots. AOPA is developing new means to support flying clubs and partnerships, he said.

Novelist Stephen Coonts, a West Virginia native who has a nearby farm with a grass runway, related his experience of flying into the airport many times and praised the welcoming pilot community at Elkins. The former naval aviator and best-selling techno-thriller author arrived at the event in his Breezy, and noted that many believe aviation is an expensive endeavor. “But if you keep your wife working, it’s not,” he joked.

Rounding out the event, the local EAA chapter provided Young Eagle flights to local students, perhaps inspiring some potential club members who will be around to celebrate the club’s centennial in 2062.

Editor in Chief
AOPA Editor in Chief Tom Haines joined AOPA in 1988. He owns and flies a Beechcraft A36 Bonanza. Since soloing at 16 and earning a private pilot certificate at 17, he has flown more than 100 models of general aviation airplanes.
Go to Thomas B Haines's Profile
Topics: GA Caucuses, Advocacy, Flying Club