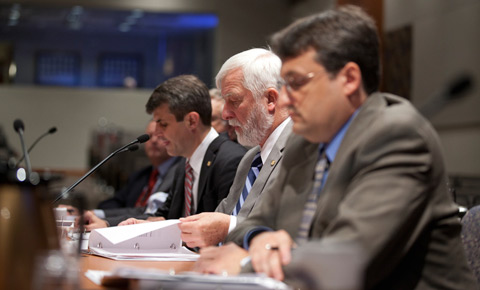 From right, NTSB Director of the Office of Research and Engineering Joseph Kolly, and safety analysts Vern Ellingstad, and Loren Groff, present their findings on experimental and amateur-built aircraft to the National Transportation Safety Board on May 22. Photo courtesy NTSB.

A gap in safety between experimental and certificated aircraft is widest on the first flight, and the early hours of flying in a new pilot’s hands.

That is among the conclusions of a detailed analysis the NTSB released May 22, with a set of recommended changes approved unanimously by the board. Working in conjunction with organizations including the Experimental Aircraft Association and type clubs, pilots and builders, and experimental aircraft manufacturers, analysts attempted to find root causes of a troubling disparity. While experimental amateur-built aircraft account for less than 10 percent of the U.S. GA fleet, such aircraft account for 15 percent of all accidents and 21 percent of the fatal accidents in 2011, the year studied in greatest detail.

Analysts and investigators drew on more than crashes: EAA supported an online survey of more than 5,000 amateur builders and owners, whose input helped NTSB staff craft a set of 16 recommendations to improve safety. The agency published online an executive summary following the May 22 meeting, with the full report to be released later.

NTSB staff found engine failure (57 accidents in 2011) and loss of control are the leading causes of accidents in experimental amateur-built (E-AB) aircraft. Of the 224 accidents from 2011 that were studied in depth, only one resulted from structural failure.

“It does not appear that the construction might be substandard. I think that was an interesting finding,” said NTSB Board Member Robert L. Sumwalt, who noted that there are a few key factors that many accidents share. “One of them is that the pilots may not be familiar with the flight characteristics of the aircraft.”

Other recommendations included a more formalized approach to aircraft testing, with phase one flight test plans to be developed and presented for review prior to the first takeoff. The NTSB also urged the FAA to work with a coalition of kit manufacturers and others to develop methods and procedures for making use of electronic data collected by modern avionics for flight testing validation.

“Overall, the NTSB highlighted the benefits of E-AB aircraft and their value to the community spurring innovation and activity,” said David Oord, AOPA manager of regulatory affairs. “A number of the recommendations will provide guidance to the E-AB community to continue educational and data tracking efforts.

“However, a few of the recommendations that point to new FAA regulation and changes to policy could hamper this innovation. EAA and the E-AB community have developed a well-established system of education and communication that should be leveraged to address safety concerns. It is through this system of education, not regulation, that we can best address safety and instill a positive safety culture.”

Analysts also found another safety concern may open when an aircraft changes hands.

In many cases, accident aircraft lifted off in the hands of pilots who had never read an operating handbook for that specific aircraft, and were unfamiliar with the specifics.

“This may be kind of the defining characteristic of the people who have had the accident, is less attention to that detail,” said Vern Ellingstad, one of the safety analysts who worked on the report and drafted recommendations.

Of the 125 accidents involving aircraft flown in 2011 by a buyer who purchased it from the original builder, 14 occurred on the first flight, NTSB analysts said.

“We appreciate the NTSB board’s unanimous acknowledgement that the amateur-built aircraft community is an important element in the growth and innovation for all of aviation,” said EAA President and CEO Rod Hightower. “We appreciate the praise that the board publicly gave to EAA’s programs and efforts on behalf of safety. We understand the need to balance safety with the freedoms that allow Americans to use their imagination and skills to create aircraft that bring new technology and designs.”