Race aircraft, their pilots and crews, and air race fans from across the country have descended on Reno/Stead Airport north of Reno, Nev., for the 2012 National Championship Air Races. Qualifications for all race classes ran from Sept. 10 through midday Sept. 12, when racing began.

A fatal crash during last year’s air races, when the highly modified P-51 Mustang Galloping Ghost abruptly rolled, pitched up, and crashed—killing longtime race pilot Jimmy Leeward and 10 spectators on the ground—cast a pall of uncertainty over this year’s event. However, course modifications, additional pilot training, and a $1.7 million insurance premium increase allowed the races to continue. This year’s races continue through Sept. 16. 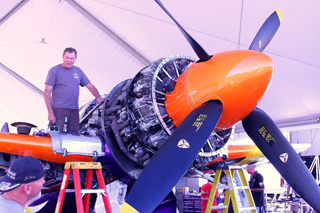 Unlimited Class race pilot Matt Jackson of Van Nuys, Calif., was not injured Sept. 11 when the right landing gear of his Hawker Sea Fury, Furias, collapsed after landing. “He had three green lights but one was flickering,” a journalist at Reno told AOPA. “Somebody came up behind him and told him the gear was down and couldn’t tell if it was locked,” he said. “He came in nice and slow, landed down on one wheel—nice and easy—then the other side collapsed,” causing the airplane to ground loop. Furias had qualified third in the Unlimited Class with a speed of 467.287 mph.

The number of racers this year is down in most categories except for Sport Class, which is at capacity, the Reno Gazette Journal reported.

Racing began Sept. 12 in all classes except Unlimited, which will fly its first heats Sept. 13. Three heats are flown in each class daily, with airshow performances between the heats. Race results are posted almost immediately on the Reno Air Racing Association website, or through the Air Races app for the Apple iPhone.

Technical Editor
Mike Collins, AOPA technical editor and director of business development, died at age 59 on February 25, 2021. He was an integral part of the AOPA Media team for nearly 30 years, and held many key editorial roles at AOPA Pilot, Flight Training, and AOPA Online. He was a gifted writer, editor, photographer, audio storyteller, and videographer, and was an instrument-rated pilot and drone pilot.
Go to Mike Collins's Profile
Topics: Air Racing, Events