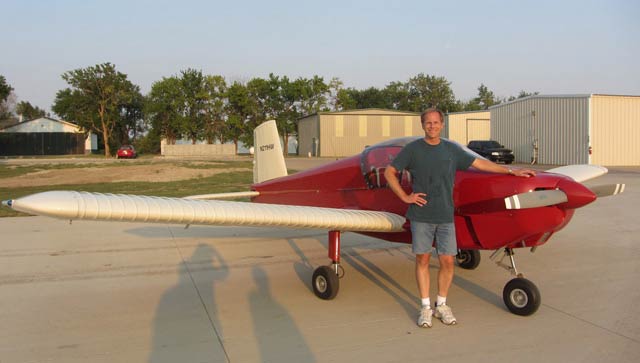 On the cutting edge of general aviation by day, Cessna Project Engineer Neal Willford spent much of his free time over the past decade working on a piece of aviation history. With his wife, Robin, and children pitching in (including a then-four-year-old whose hands were a perfect size to place rivets in tight spots), Willford brought a 40-year-old kit to life. The Thorp T-211, designed by John Thorp, who left his mark on many aircraft including the Piper Cherokee, never took off as a commercial success, though Willford saw in it the birth of several innovations, and a link to history.

“It was like a time capsule,” Willford said, noting that most of the parts that came in the kit he bought in 2002 were stamped with factory marks from the 1960s. The original design dates to 1945, and a variant has recently been produced as a light sport aircraft. Willford’s experimental kit version is similar to the LSA variant, but powered by a Continental O-200-A that was previously installed in a 1967 Cessna 150.

Willford, who worked on Cessna’s light sport projects (both the proof-of-concept and Skycatcher development) said building an aircraft of his own provided valuable insight.

“You learn a whole lot more than I guess you think you’re going to learn,” Willford said. “It was very helpful as a designer to actually build something.”

If the Sky Scooter has DNA in common with many modern aircraft, Willford himself, though working for an industry giant, has homebuilding in his own DNA: His father was one of the first 100 members of the Experimental Aircraft Association, Willford said. The engineer-turned-homebuilder came to a few conclusions during the decade-long project, including the conclusion that fabricating wings and fuselage is a lot more fun than running wires.

“Kit manufacturers make the wrong 49 percent,” Willford quipped. Spend a day building control surfaces and wings, and you can see progress at the end. Spend a day installing wires and instruments, and there may be few outward signs of progress to spur the next day’s effort.

The T-211 was among the first kits to utilize “matched hole” parts, which spare the homebuilder the task of setting up jigs and drilling holes for fasteners. “It’s in a sense like a big Erector Set,” Willford said. Robin quickly discovered, to his dismay, that handling the rivet gun is a lot more fun than holding the bucking bar.

“She never bucked a rivet again after that,” he said.

CFI Dave Blanton helped Willford get the rust off a long-unused pilot certificate, and prepare for a first flight in his new aircraft. The owner of a light sport version of the T-211 let Willford get some stick time in advance of the maiden flight, a flight Blanton strongly encouraged Willford to make himself. The Sky Scooter operates at speeds very similar to a Cessna 172, Willford discovered, and he was thus more familiar with the aircraft than many experimental builders are as he first took hold of the controls.

The first flight out of Lloyd Stearman Field in Benton, Kan., was smooth, Willford staying in the pattern as his family watched from below.

“It’s kind of fun to have something a little unique,” said Willford.