Get the app Get the app
AOPA Members DO more LEARN more SAVE more - Get MORE out of being a pilot - CLICK HERE
News & Media Pilot, 20, readies bid to become youngest 'earthrounder' 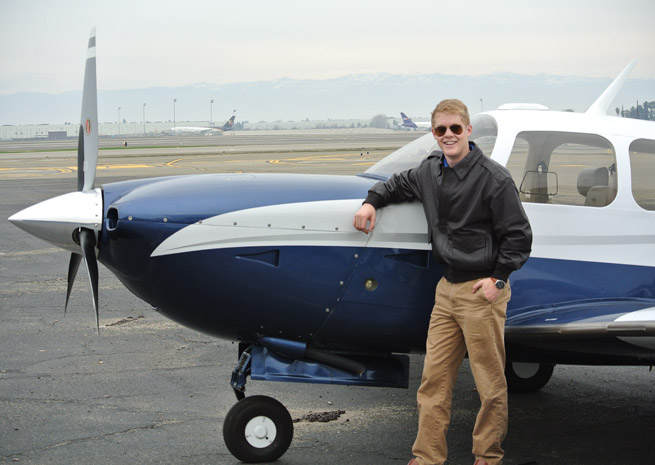 The aircraft’s annual inspection is complete. The immersion suit arrived on time, and on May 1, a 20-year-old pilot from Fresno, Calif., plans to depart on a bid to become the Guinness World Records youngest person to fly around the word solo.

Jack Wiegand, a business major at the University of Colorado in Boulder, plans to fly his family’s Mooney Ovation2 GX on a 50-day, 21,000-mile flight, making 24 stops in 14 countries (and crossing three oceans). The Garmin G1000-equipped Ovation’s 170- to 190-KTAS performance and comfort make it a good choice for the flight, said Wiegand, who plans to make the trip mostly under instrument flight rules to ease international transit. He was prepared to undertake a fair amount of flying in instrument conditions, said the 700-hour pilot who has loved flying since taking an introductory glider ride given to him as a present for his thirteenth birthday.

Success will allow Wiegand to claim the record for being the youngest person to fly around the world solo from Carlo Schmid of Switzerland, who earned the title in 2012 at 22. Schmid had earned the title by completing his flight at a younger age than Barrington Irving, who rounded the globe at 23 in 2007.

For Wiegand, who soloed not one but two gliders on his fourteenth birthday, and first flew powered aircraft in a Piper Cherokee, the idea of a record bid has been in the back of his mind sine he learned about the possibility, he said. Plans began to shape up for the flight in earnest last summer.

Within the community of aviators deemed to be earthrounders, Wiegand is already a known man, doing his homework and getting tips and advice from such experienced pilots as Robert Gannon, who has gone around twice in a Cessna 182.

Wiegand has a well-oiled team of marketing reps and publicity specialists working to raise media interest in sponsorships for his flight, which he hopes will benefit nonprofit agencies Big Brothers Big Sisters and the International Agri-Center Ag Warriors, an organization working to place returning military veterans in agriculture-industry professions.

Departing May 1 from Fresno, Wiegand’s route will take him east to New York on May 2; Nuuk, Greenland, on May 5; Reyjkavik, Iceland, on May 7; and London on May 9. (See his website for the complete itinerary.)

Support and encouragement have flowed from many quarters, but Wiegand concedes that there have also been some comments from the other end of the spectrum.

He takes it in stride, turning it into a positive by observing that without some constructive criticism, “you get a little complacent.”

Dan Namowitz has been writing for AOPA in a variety of capacities since 1991. He has been a flight instructor since 1990 and is a 35-year AOPA member.
Go to Dan Namowitz's Profile
Topics: Around-the-World Flight, Travel, People