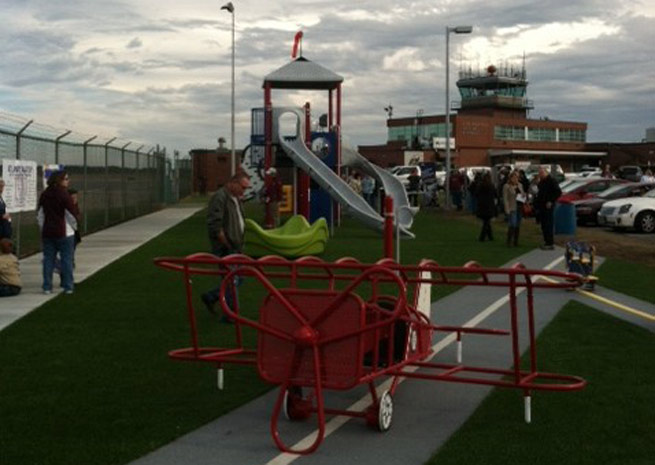 A new aviation-themed playground that opened at New Bedford Regional Airport in Massachusetts on Nov. 2 serves as a good example of new AOPA President Mark Baker’s objective to make general aviation airports welcoming and instruments to inspire a new generation of pilots.

The playground came from an idea of AOPA Airport Support Network volunteer Donald Velozo and was implemented by the Atlantic Aviators, a chapter of Women in Aviation, International. “When I became the new ASN volunteer, my predecessor gave me a video of a movie called ‘One Six Right,’ [which was] about general aviation airports,” he said. “In the movie, there was a scene with a playground at the airport. I thought it was cool. I remember doing that as a kid. It inspired me to become a pilot, so it struck a chord with me.” 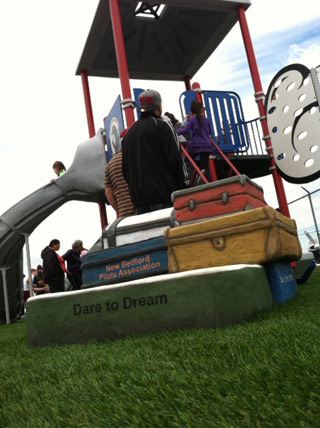 Atlantic Aviators chapter President Tammie Irwin and Velozo are also members of the New Bedford Regional Airport Pilots Association. “I’ve known Don for a long time, and he and other pilots have been supportive of our chapter,” including the chapter’s annual Airport Fun Day, said Irwin.

Fun Day is an open house where the community can walk around the airport, look at airplanes, meet people and learn more about aviation, said Irwin. “Don and some other pilots offered sightseeing rides for a small fee, and then donated the money to our chapter,” she said. “He then said he wanted our chapter to do the airport playground, so we took the reins.”

There has actually been an unofficial playground at the airport for years, said Irwin. “We’ve seen kids playing in the grass. There were also picnic tables, and kids would play, see an airplane take off and run to watch it,” she said. “So we thought it would be the perfect place to put a playground. Even better, making it aviation themed would let children use their imagination and look forward to aviation as a possible career as they get older.”

Velozo said he sees the playground as a seed program for pilots. “We have Little League baseball and pee wee football, so I see this as a way to get kids interested in flying,” he said. “Flying is a spectator event. People fly, but more are watching.”

The project was appealing because the chapter’s mission is to introduce and educate the community to the world of aviation, said Irwin. “We give scholarships and have worked hard to get kids and young people into aviation,” she said.

The first challenge was the price tag, which was $165,000, said Irwin. “When we first started, we had no idea what it would cost. We knew we wanted something aviation themed,” she said. “But that’s a staggering amount for a small group. The challenge was how we raise that money without overextending those who help us regularly. We’re all just volunteers and we all have other things going on in our lives.” 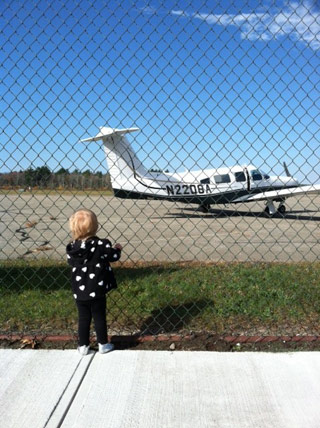 Atlantic Aviators found the money by applying for private and corporate grants and holding fundraisers, said Irwin. “We also customized pieces on the playground that were purchased by individuals, organizations and companies.”

“Saturday’s ribbon-cutting ceremony was particularly special for me, as not only did I learn to fly at this very airport as a student at Bridgewater State College (now university), but my daughter can now come and enjoy many of the same sights and sounds I did growing up around airports in Maine,” said Sean Collins, AOPA Eastern regional manager. “Now she and many other children have the opportunity to come out to the airport and be inspired by aviation just as I was—and from such a unique perspective as provided by the Atlantic Aviators. The airport is fortunate to have such a great community of folks, many of them AOPA members, who devote themselves to their airport and the future of general aviation.”

Irwin advises groups who want to take on a similar project to have patience and persevere. “There were so many times we got to the point where we couldn’t keep asking the same people to help is, but they were always willing to do something,” she said. “Keep your eyes open for opportunities. Grants and in-kind donations were vital, and we learned how to write proposals.”

Finally, keep asking, said Irwin. “There were so many times we got turned down when asking for money. But we’d keep going back,” she said. “As we raised more money, we could show that we weren’t some fly-by-night operation, and when we asked again, they said yes.”

Velozo said he hopes the new playground will attract the community to the airport so they can see what’s happening at the facility. “When we got close to finishing the playground, people stepped up to the plate with a community build and got it done,” he said. “So now, those who got involved are coming to see the kids using it. The community is now more interested in the airport.

“I want kids to come with their fingers in the fence and want to be on the other side of it and become pilots,” said Velozo. “That’s the end game.” 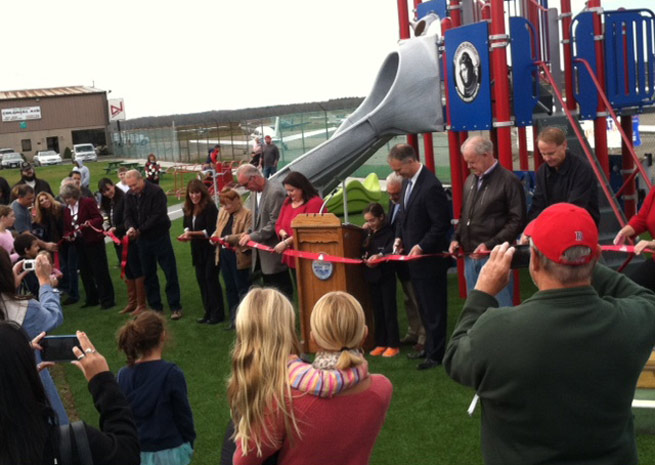