Get the app Get the app
AOPA will be closing at 3:15pm ET Thursday, December 1st. We will reopen Friday morning at 8:30am ET.
AOPA Members DO more LEARN more SAVE more - Get MORE out of being a pilot - CLICK HERE
News & Media Teen jailed for airplane theft

Untrained, made multiple flights over months 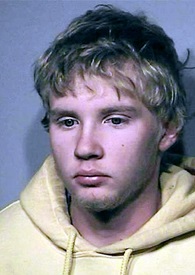 Geoffrey Biteman, a self-taught pilot at age 18, made his final landing on an unlit North Dakota state highway after dark, parking the Cessna 150 everyone had assumed was his at the farm where he was late for work picking beets.

Rolling a beet truck into a ditch that night would be his undoing, though it was by then a matter of time: Roseau, Minn. Police Chief Ward Anderson was already on Biteman’s trail.

It remains unclear exactly how many times Biteman availed himself of the 1971 Cessna, left unlocked and easily accessible in a hangar at Roseau Municipal Airport/Rudy Billberg Field in Roseau, Minn. The teen pleaded guilty to state charges on Nov. 25 that carry a negotiated penalty of 13 months in prison, suspended after 60 days, followed by another 60 days of home confinement with electronic monitoring, and five years of probation. He will be required to pay just over $1,000 in fines, and make restitution for damages to the Cessna’s owners—an amount that remains to be determined.

Over the course of many flights between April and October, Biteman occasionally raised suspicions (he was seen at least once landing nosewheel-first), but talked his way out of trouble until a phone call from a North Dakota farmer closed the net.

The two-seat Cessna that Biteman made his own actually belongs to two brothers: U.S. Air Force Maj. Joshua Rasmussen, who is deployed in Afghanistan, and U.S. Army Maj. Adam Rasmussen, according to the Grand Forks Herald.

“They’d been trying to sell the plane for over a year,” Anderson said of the absent owners.

In the months to come, Biteman helped himself to the Cessna instead, using keys left in the aircraft and flying frequently (and ironically) to Thief River Falls, Minn. He made the 50-mile trip many times over the summer, commuting to attend aviation maintenance classes, he later told Anderson. Some of those frequent flights raised suspicion among pilots and airport staff, in part because Biteman had a penchant for fueling “his” airplane with jugs of automotive gasoline.

“This kid was telling everybody that he’s a pilot,” Anderson said. “We even assumed, in the beginning, that he had a pilot’s license. Who in their right mind would fly a plane without a pilot’s license? You just don’t hear of that kind of thing.”

AOPA Manager of Aviation Security Tom Zecha said that while thankfully rare, the case highlights the potential cost of complacency for any owner who leaves an airplane unsecured. Door locks, throttle locks, propeller locks, and similar devices can deter or slow down, if not always prevent unauthorized use. Observant pilots and airport staff also have a role to play.

“It can happen anywhere, unfortunately,” Zecha said. “Complacency is a problem.”

AOPA partnered with federal officials a decade ago to establish an Airport Watch Program to enhance security from within the general aviation community. It remains a resource available to all, with online training, literature, and a toll-free number for reporting suspicious activity.

Suspicions made their way through the local grapevine to Anderson in early October. A Roseau pilot had watched Biteman and another teenage boy land, park the Cessna in its hangar, and then take the courtesy car for a spin—literally.

“They started whipping around with it … driving recklessly,” Anderson recounted, “which upset this guy.”

The teens got a chewing-out for reckless driving in the borrowed airport car, and the local pilot came to wonder why anyone with hangar access would need a courtesy car, and not have their own car parked at the airport. Anderson started looking into it.

An outside inspection of the Cessna in the hangar and subsequent registration check led Anderson to the real owners’ father, who reported on no uncertain terms that no one had permission to fly the airplane, and furthermore it was “out of annual and for sale.”

Anderson returned to the hangar with the owner’s permission to look inside the Cessna, and found clothing belonging to Biteman and mail addressed to Biteman. Still, making a felony case required catching Biteman in the act of aviating, and Anderson secured permission to install a tracking device that would alert him to the next flight.

“When we went out to put the tracker in the airplane, the plane was gone,” Anderson said. “We still had to place the kid in the plane to make a case.”

Days went by before a phone call from Thief River Falls pointed police to a farm in St. Thomas, N.D., where Biteman had landed around 10 p.m. to pick beets, taxiing the stolen Cessna onto the farm’s driveway three hours after he was supposed to be in the fields.

“The farmer told me he was a little upset because the kid was late for his job,” Anderson recalled.

The farmer, Kevin Lee, told the Grand Forks Herald that Biteman claimed he was a flight instructor, and offered to give flying lessons.

“This kid had all sorts of stories,” Lee told the newspaper.

Biteman had a bad night in the beet fields, rolling the truck he was driving into a ditch and suffering a separated shoulder that required a trip to the hospital.

Anderson said Lee, not sure of what to do about the Cessna that Biteman was now too hurt to fly, soon called a nearby airport to inquire about who could help, and word made its way to Roseau via Thief River Falls that the sought-after Cessna was waiting at Lee’s farm near St. Thomas, about 66 miles west of where the Cessna was supposed to be. Anderson said he called the aircraft owners, who set to work securing a ferry permit. “We had Biteman arrested in Thief River the same day.”

The mug shot, taken Oct. 22 by county sheriffs, captured Biteman with a vacant expression, tousled blond hair, a boyish face and wispy fuzz on his chin. He will be sentenced Jan. 6, following a routine pre-sentencing investigation likely to note a previous guilty plea for stealing a horse trailer that was noted by the Grand Forks Herald. Assistant County Attorney Michael Grover said the felony charge of motor vehicle theft and a misdemeanor charge for unauthorized use of an aircraft were all that could be proved.

“We didn’t really have any evidence that he had endangered people … put people’s lives in danger other than his own,” Grover said, noting that with respect to property crimes, state law does not distinguish between stealing a car and stealing a Cessna: Both are considered a motor vehicle.

With five years of probation to serve after 60 days of incarceration and another 60 days of home confinement, Biteman “has pretty significant reasons to stay out of trouble,” Grover said.

Biteman was represented by Thief River Falls attorney Seamus Duffy, who did not immediately respond to a message seeking comment.

Anderson said the Federal Bureau of Investigations concluded Biteman is not a terrorist, and deferred to state officials on criminal prosecution; the FAA investigation appears likely to result in additional civil penalties.

Grover agreed that locks would at least have made Biteman’s illicit flights more difficult, and very possibly put the Cessna beyond his reach, and he is hopeful other aircraft owners will take heed and lock their doors.

“I think that’s a good lesson that was probably learned that’s come out of this case,” Grover said.