Get the app Get the app
Already a member? Please login below for an enhanced experience. Not a member? Join today
News & Media TBM 900 debuts to public at Sun 'n Fun

Daher Socata is on hand at Sun 'n Fun with the first two of the four new TBM 900s recently delivered to the United States. It was the first public showing of the new design. N900KN, recently delivered to Larry Glazer, is on display at the Daher Socata booth. Glazer, Chairman of the TBM Owners and Pilots Association, is no stranger to the marque; his TBM 900 is the third TBM he’s owned.

At a Sun 'n Fun press conference on April 1, Stéphane Mayer, president and CEO of Daher-Socata, reviewed several interesting facts about the evolution of the TBM series’ popularity. “It took us from 1990 to 2004—14 years—to deliver the first 300 TBMs,” Mayer said. “But the next 300 were delivered in half that time, from 2004 to 2011. The big jump in rates of delivery came with the TBM 850, which came out in 2006.”

Nicolas Chabbert, senior vice president of Daher-Socata’s Airplane Business Unit, emphasized that the TBM 900 is the fastest yet, able to cruise at 330 knots at Flight Level 280. Compared to the TBM 850, the 900 can cruise at the same speed—but with an eight-percent greater range (about 130 nautical miles)—as the 850. Conversely, the 900 is able to fly the same range profiles as the 850, but at speeds 40 knots faster than the 850. All this while having shorter takeoff distances and faster times to climb.

The extra speed and efficiency comes via an extensive aerodynamic evaluation and modification of the TBM airframe and induction system, plus a 150-shp boost in takeoff power thanks to a new torque limiting system and a Hartzell five-blade propeller.

As of March 31, six TBM 900s had been delivered to customers, and the order book is up to 44 airplanes.

Look for an upcoming story in AOPA Pilot on a trans-Atlantic delivery flight of the first TBM 900, as well as a video covering the trip on a segment of AOPA Live This Week. 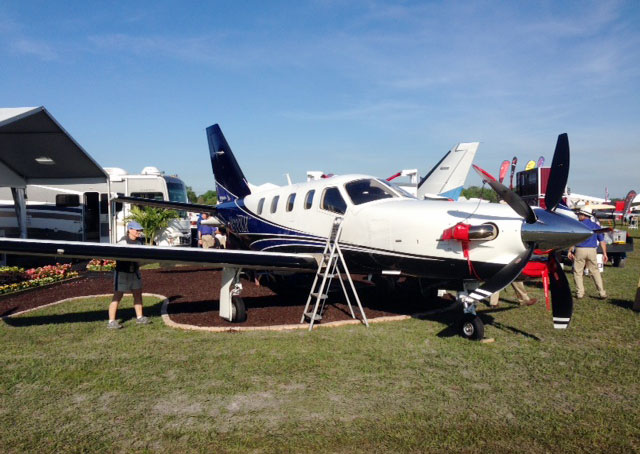 AOPA Pilot Editor at Large
AOPA Pilot Editor at Large Tom Horne has worked at AOPA since the early 1980s. He began flying in 1975 and has an airline transport pilot and flight instructor certificates. He’s flown everything from ultralights to Gulfstreams and ferried numerous piston airplanes across the Atlantic.
Go to Thomas A. Horne's Profile
Topics: Turbine Aircraft, Sun n Fun, Aviation Industry