The glass-cockpit, high-wing, piston-engine V1.0 is certified in Europe, and Vulcanair expects to start validation with the FAA by September. The aircraft will sell for about $250,000, CEO Remo De Feo said, and Vulcanair hopes to start deliveries in the U.S. in 2015. Vulcanair displayed an aircraft from its production line at the general aviation show Aero Friedrichshafen in Germany.

Welded steel tubes form a frame for the fuselage, and the wings, tailcone, and empennage sections are constructed of riveted aluminum, a construction Vulcanair said provides for a lightweight structure. Maximum takeoff weight is 2,546 pounds, and with a typically equipped empty weight of 1,627 pounds, the maximum useful load is 919 pounds. The baggage compartment holds 88 pounds, Vulcanair said, and three doors provide access to the four-seat cabin.

Powered by a Lycoming IO-360-M1A, the V1.0’s maximum cruise speed is 139 KTAS; at 45-percent power at 10,000 feet it can fly 600 nautical miles with a 45-minute reserve. De Feo said having four seats increases the aircraft's scope of use—it can be used as a trainer as well as for cross-country flights. It is certified in the utility category, which allows 4.5 Gs, De Feo said, "so it allows basic aerobatic maneuvers, and in general it’s an additional safety attribute demonstrating the aircraft robustness."

A Garmin G500 and GTN650 are part of a standard avionics package that also includes a JPI digital engine monitoring system, Mid Continent’s digital Standby Attitude Module, and an angle of attack indicator. An IFR version also is available. Pilots familiar with Vulcanair's twins may notice similarities in the tail, landing gear, and wing profile.

Vulcanair was awarded the European type certificate in 2013 in the utility category. The company, whose P68-series light twins are suited to such special missions as mapping or aerial surveillance, describes its design philosophy as “durability safety and exceptional value.” The recently announced A-VIATOR turboprop version of the twin also was showcased at Aero. 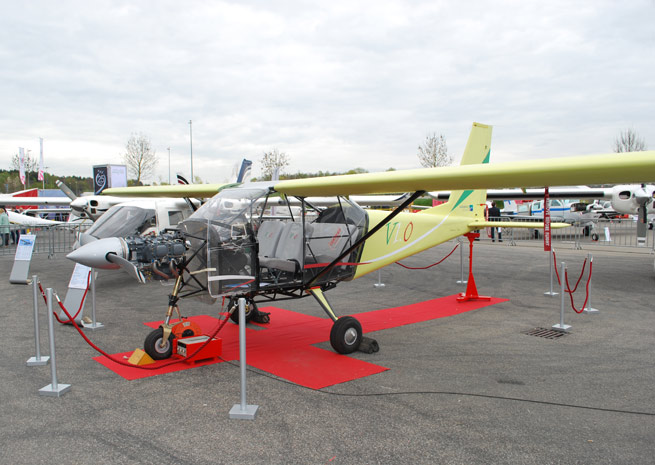