Racing to a safer cockpit

Formula One race cars have more in common with contemporary aircraft that many might think: Both are capable of high speed (about 225 mph, in the case of modern Formula One cars), both are engineered for light weight (a Formula One car weighs about 1,400 pounds), and both use airfoils, either to lift them or hold them down. When it comes to making use of modern technology to make cockpits better able to protect occupants, the Formula One car and modern general aviation aircraft have a very different history.

While 50 drivers have lost their lives in a Formula One car since 1952, only three have been killed since Ayrton Senna died in a 1994 crash (none during a Grand Prix race). Formula One designers have made many safety improvements since Senna's death, including vehicle and cockpit designs that are better able to absorb or redirect crash forces away from the driver. That same basic strategy is now being applied to a German-led effort to devise a safer general aviation cockpit. 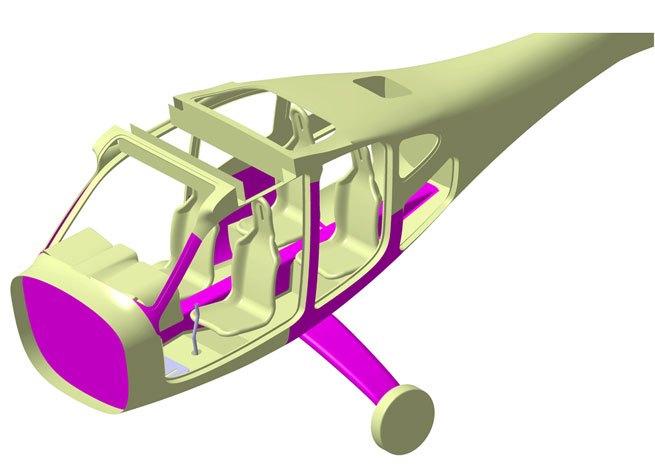 Presented in detail for the first time at the recent Aero Friedrichshafen show, the Safety Box project is a collaboration funded by the German government, uniting academic institutions and aircraft makers in an effort to apply the lessons long since learned in the automotive world to general aviation cabins of the future. Flight Design’s C4, currently in development with certification expected in 2015, was chosen as the first aircraft to have this crash-protection technology applied.

“Crashworthiness is an area where general aviation can benefit greatly from the work done in automotive and race car design,” said Tom Peghiny of Flight Design, in an email. “Energy absorbing structures, crumple zone and occupant protection are part of the design process on all modern automobiles, and this knowledge can be directly applied to light aircraft design.”

Flight Design aircraft, including the C4, also feature ballistic, full-airframe parachutes; the Safety Box will add another layer of protection. The technology will be put to the test when a C4 test fuselage with anthropomorphic dummies on board is crashed in controlled conditions. Once proven, the technology will be made available to other general aviation manufacturers, Peghiny said, and can be incorporated into future designs. (The complete Safety Box system cannot be retrofitted into existing aircraft.)

The C4, a four-seat aircraft expected to sell for $250,000, will be tested in various seating configurations during crash trials expected in the summer of 2015. The estimated price tag is dependent in large part of the ongoing work to overhaul the Part 23 and analogous European aircraft certification standards, an effort that AOPA is participating in alongside government, industry, and other aviation organizations that is expected to "double the safety" of future aircraft, while cutting cost in half.