Get the app Get the app
AOPA will be closed July 4th, in observance of the Independence Day holiday. We will reopen at 8:30 am ET on Tuesday, July 5.
News & Media Webinar touts importance of New York jobs bill 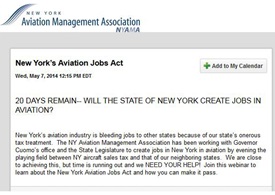 AOPA and the New York Aviation Management Association have joined forces to offer a free webinar to explain the importance of the Aviation Jobs Act.

The webinar was created to educate members on Senate Bill 273-B and Assembly Bill 3677-B, currently under review in the final days of the state’s 2014 legislative session. The bills were sponsored by Sen. William Larkin and Assemblywoman Donna Lupardo.

“In 2004, New York made great progress in cultivating the competitiveness of its aviation industry by enacting a sales tax exemption on aircraft maintenance,” said AOPA Eastern Regional Manager Sean Collins. “GA is, however, a mobile industry, so while convenience is a chief concern, expense is the principal motive given to basing aircraft.”

Mobility is uniquely prevalent in the Northeast where states’ relatively small sizes and close proximity greatly enhance the competition between them, said Collins. “The net result for New York is an industry whose economic potential is severely restrained when compared to its neighbors,” he said. “Therefore I urge all of our New York members to attend the New York Aviation Management Association's free webinar to learn more about the Aviation Jobs Act and what they can do to directly reduce the cost of aircraft ownership at home.”

Since 2002, New York has lost nearly 700 income-generating aircraft, according to an AOPA action brief. States that experience the broadest range of industry growth employ a comprehensive tax incentive extending to not only maintenance and parts, but on the sale of aircraft. This key facet attracts the greatest number of aircraft, directly supporting aviation jobs and the airports that rely on them.

By enacting the Aviation Jobs Act, New York will remain competitive with neighboring states; experience an immediate increase in the number of based aircraft; generate hundreds of new, good wage-paying jobs; support the state’s system of airports through tenant services; increase ancillary tax revenues; and produce an abrupt increase in economic activity.

Members are being asked to contact their legislators in the Assembly and Senate and urge them to support the Aviation Jobs Act and to participate in the webinar. The webinar is scheduled for Wednesday, May 7, from 12:15 to 12:45 p.m. Eastern. Register for the webinar online.