Mahindra to put floats on Airvan 8

Mahindra Aerospace, a part of India’s Mahindra Group, announced that it intends to offer Wipline’s 3450 amphibious floats for its eight-passenger utility airplane, the Airvan 8. Wipaire Inc. has begun feasibility testing on the Airvan 8. If the results are successful, a certification program to install the floats will be launched in late 2014, a Mahindra spokesman said.

The Airvan 8 is a high-wing single powered by a 300-horsepower Lycoming IO-540-K1A5 or a turbocharged Lycoming TIO-540-AH1A. The normally aspirated version has a maximum useful load of 1,725 pounds, can take off and clear a 50-foot obstacle on 2,066 feet, and land within 1,213 feet. The turbocharged version can clear 50-foot obstacles during take off and landing in 1,600 feet and 1,621 feet, respectively. Typical cruise speeds for both airplanes is in the 130 knot to 135 knot range.

In other news, Mahindra says it is now accepting deposits for its new 10-passenger turboprop single, the Rolls-Royce 250-B17, 450-shp-powered Airvan 10. This airplane cruises at 145 knots and has a maximum useful load of 2,300 pounds. 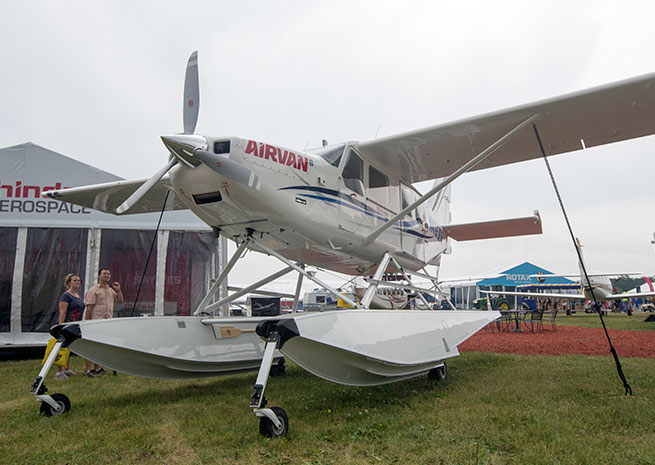 AOPA Pilot Editor at Large
AOPA Pilot Editor at Large Tom Horne has worked at AOPA since the early 1980s. He began flying in 1975 and has an airline transport pilot and flight instructor certificates. He’s flown everything from ultralights to Gulfstreams and ferried numerous piston airplanes across the Atlantic.
Go to Thomas A. Horne's Profile
Topics: Gear, EAA AirVenture, Events