Get the app Get the app
Already a member? Please login below for an enhanced experience. Not a member? Join today
News & Media Fire risk prompts AD 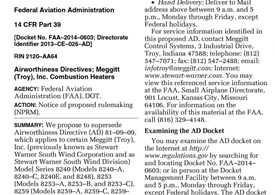 The proposed AD, published Aug. 20 in a notice of proposed rulemaking, would affect an estimated 6,000 aircraft, primarily Cessna and Piper models. The proposed AD modifies AD 81-09-09 issued in 1981, with a calendar time requirement added to the previous time-in-service inspection mandate. The proposed AD mandates a pressure decay test, component inspections, and also prohibits repair of the combustion tube.

The FAA estimates that individual inspections will cost $425, with additional costs of up to $6,000 to overhaul a defective heater and related parts, or $255 to remove the heater. The inspections are estimated to cost $2.55 million across the fleet ($425 for each of 6,000 affected aircraft. Overhaul of every installed unit in the fleet would cost about $36 million.)

The FAA did not specify the date or offer additional details about the accident that prompted it to investigate heaters of various models sold under the Meggitt and Stewart Warner South Wind brands. The new AD gives owners two calendar months or 10 hours of flight time to comply with the new inspection requirements.

“Regardless of whether the heater played a part in the above-referenced accident, this condition of deteriorated ignition components and smoke and fumes in the cabin could lead to passenger injury on other airplanes incorporating such heaters if not inspected and corrected,” the FAA states in the Aug. 20 notice.

AOPA is reviewing the proposed AD, and will submit comments. Comments are due Oct. 6, and can be submitted online or by mail to the address listed in the notice.