However, Sikorsky nonetheless is planning a series of layoffs of salaried employees over the next few weeks.

“A year ago at this event we thought sequestration would never happen,” Maurer said this week. But in fact the U.S. Congress last spring allowed the budget process to “go over the fiscal cliff,” triggering mandatory budget cuts—especially deep in military spending. The effect for Sikorsky was a decline in the number of 2013 helicopter deliveries, but with new products coming to market, the company’s backlog has never been higher, including a record $2 billion in commercial orders.

The S-76D corporate helicopter entered service in 2013, helping to soften the blow to the year’s deliveries. With a maturing delivery stream, the company hopes to further boost 2014 sales with the delivery of the capable corporate model.

The United Technologies company is also showing the S-97 Raider at Heli-Expo, a demonstrator scheduled to fly by the end of the year—the first application of the co-axial rotor technology, which set helicopter speed records two years ago on the X-2 technology demonstrator. The Raider is a composite high-speed armed aerial scout concept Sikorsky hopes to sell to the U.S. Army. Maurer said the SB1 Defiant, a future vertical left design developed in partnership with Boeing Helicopters, is further into the future but still leverages X-2 technology. The Defiant is meant to be a replacement for the Black Hawk and Apache helicopters, promising orders of more than 4,000 helicopters worth some $80 billion.

Meanwhile, Sikorsky hopes to learn within months whether it is the winner of the contract to produce new helicopters for the presidential fleet, a 21-ship order of custom S-92s for VIP transport. After years of controversy, Sikorsky remains the only bidder on the project. 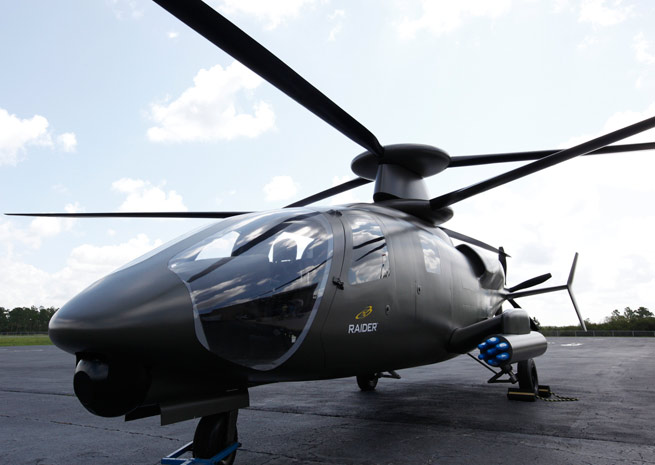 Contributor (former Editor in Chief)
Contributor and former AOPA Editor in Chief Tom Haines joined AOPA in 1988. He owns and flies a Beechcraft A36 Bonanza. Since soloing at 16 and earning a private pilot certificate at 17, he has flown more than 100 models of general aviation airplanes.
Go to Thomas B Haines's Profile
Topics: Helicopter, Helicopter Association International, Aviation Organizations