Get the app Get the app
AOPA Members DO more LEARN more SAVE more - Get MORE out of being a pilot - CLICK HERE
News & Media Houghton out, Reno at crossroads

Houghton out, Reno at crossroads 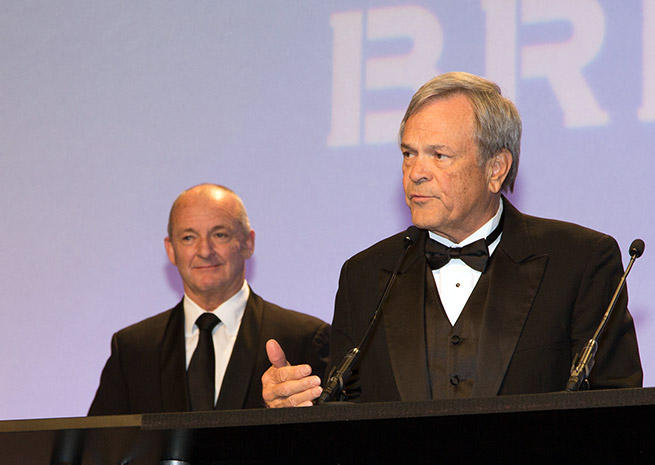 With two successful years of racing now complete following the tragic crash of 2011, the Reno Air Racing Association, the nonprofit organization behind the National Championship Air Races, remains locked in a struggle for survival. The association will soon learn if the insurance bill—which skyrocketed in the wake of Jimmy Leeward’s crash that killed the veteran pilot and 10 spectators—is a bill the association can afford for 2014, and beyond.

With the association’s cash reserves depleted, the board now lead by Chairman Mike Major decided in December that longtime CEO Mike Houghton must be cut from the payroll.

“We’re all going to miss Mike,” Major said of Houghton in a telephone interview. “Mike was a mentor for many of us.”

Major said the decision, like the decision to reduce staff and issue an urgent plea for donations in November, was driven by “realities of the fiscal situation … that’s where we are today.” Major said the various duties and responsibilities of the chief executive have been allocated to board members who have relevant expertise, and noted that the association retains a dedicated staff even after the elimination of three full-time positions in as many months. Houghton kept the records and files well-organized, Major noted, making it easier to pick up where he left off.

“To this point in time it is working very well,” Major said.

Houghton, also reached by telephone, said he was “disappointed with the terms and conditions of the departure,” a decision he was informed of two days after Christmas, and two weeks after announcing a successful donation drive. It was “very untimely,” Houghton said, then paused, adding, “It’s never timely.”

The board’s decision followed an eventful year on the litigation front, with the association being dismissed as a defendant in several cases following settlement agreements. Ken Feinberg, hired by the association in May 2012 to mediate litigation filed on behalf of the spectators killed in the 2011 crash, is now the administrator of a $77 million fund established to compensate victims in lieu of litigation. Feinberg, who also administered the compensation fund for victims of the Sept. 11, 2001, terrorist attacks, and a $20 billion fund to compensate victims of the 2010 BP oil spill in the Gulf of Mexico, helped the association work with more than two dozen lawyers representing various plaintiffs to settle federal lawsuits related to the 2011 crash. Houghton said the fund was part of an overall strategy that included compensation for those who lost loved ones, or were injured:

Federal court records indicate that the association is no longer a defendant in remaining litigation; Leeward’s various companies, also defendants in the federal cases, settled more recently; Major said he could not say conclusively that the legal process is complete. “I honest to goodness don’t know.”

The once-unknown limits of the association’s liability—and the bill to be paid by insurance—are now known, in large part if not entirely. Major said the board hopes that will lead to another reduction in the insurance bill for the race, which shot up from $339,718 in 2011 to $2.1 million in 2012, according to the association’s recent tax returns. The association’s representatives will begin meeting this month with insurers in London, and the rate for insuring the 2014 race will likely be set by March, if not sooner. That, Major said, will be a major factor in determining whether the event can continue.

“We are also doing some internal business planning, that type of thing,” Major said.

The insurance premium for 2013 was reduced to $1.2 million, though Major said a more significant reduction is needed to make the races financially sustainable.

Tax returns filed by the nonprofit group (which are public documents under federal law) show clearly the financial burden that has left the association struggling to survive. In 2009, the association reported $4.7 million in expenses, including $741,808 in personnel costs, with $4.8 million revenue and $2.4 million in net assets. The 2012 tax year filing lists $6.4 million in expenses, including the $2.1 million insurance bill, and a net loss of $747,143. That followed a net loss of $698,063 in 2011. Total personnel cost was reduced to $674,279 in 2012, including the CEO’s salary of $158,400, according to the tax return, with year-end net assets (including cash reserves) reduced to less than $1 million. The 2013 tax filing is not due until later this year, though Major said the cash reserves are essentially gone.

“The (insurance) premium that we end up with … for the 2014 race year is going to be a large determinant of where we can go,” Major said Jan. 3.

Houghton, who previously served as an executive at Boeing and was vice president of marketing at the Reno-Sparks Convention and Visitors Authority until he was hired in 1998 to lead the race association, said he will pursue a new opportunity to put his skills and experience to work. That experience includes saving a race that many thought could not be saved in the wake of Leeward’s crash.

“I took it all very personally,” Houghton said of his work with families, as well as federal investigators and regulators following the crash, a job that included  “making sure that we were staying sensitive and in tune with what were the right things to do as opposed to what were the business things to do.” 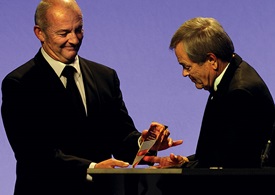 Houghton was honored in December by the International Council of Air Shows with the council’s inaugural “Wingman” award, recognizing his successful efforts to keep the races going. ICAS President John Cudahy was at Houghton’s side as the former race association CEO was called to Washington to address the NTSB in 2012, and field questions about safety and procedures while the related litigation—and the crash investigation itself—was ongoing. Cudahy said he was impressed with Houghton’s ability to manage that delicate task.

“He was the consummate professional, navigating his organization through a series of challenges that many believed would be insurmountable,” Cudahy said of Houghton. “The very fact that they were able to have races in 2012 is a testament to the strength not just of the entire organization, but of Mike, specifically.”

Major said the board’s goal is to ensure the long-term survival of the annual race, and is confident that members and staff collectively have the skills to fill the void left by Houghton’s departure.

“We think we can do this efficiently, and get through this first year,” Major said. “It is doable.”

Cudahy said the Reno races are an important event not just for the local community, but the airshow industry as a whole. It is among a handful of “destination” events, able to draw huge crowds and comparable in its significance to EAA AirVenture in Oshkosh, Wis., and Sun ‘n Fun in Lakeland, Fla.

“As such, it’s important for our whole aerial events industry that it continues to do well,” Cudahy said. As for Houghton’s departure, “one can only assume that the board of directors was faced with such financial challenges that they really had no choice.”