Get the app Get the app
AOPA will be closing at 1:45pm ET on Tuesday, December 6th. We will reopen Wednesday morning at 8:30am ET.
AOPA Members DO more LEARN more SAVE more - Get MORE out of being a pilot - CLICK HERE
News & Media Larkins on Forbes list 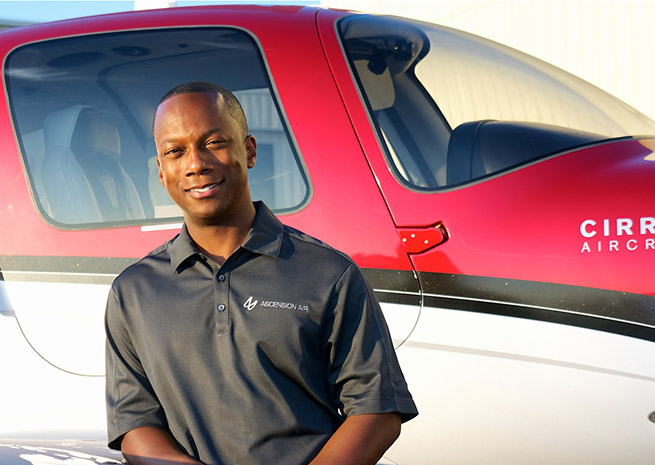 Jamail Larkins has earned more recognition and honors than most young entrepreneurs, and Forbes magazine is the latest addition to that list. Larkins, the founder of Cirrus fractional ownership company Ascension Air, along with a Cirrus dealership also based in Atlanta, was among 450 young innovators and entrepreneurs highlighted in the magazine’s “30 under 30” list, a series of lists created to highlight achievements in a range of fields and business sectors. Larkins, 29, leads the list of young people changing the world in the energy and industry sector. The magazine noted many of Larkins’ accomplishments, from his first forays into business and aviation as a teenager to his more recent success with fractional aircraft sales.

Despite a long history of similar accolades (Larkins lead similar lists compiled by Inc. magazine and BusinessWeek in 2009,  made TheGrio.com’s list of “100 History Makers in the Making” in 2010, and was singled out by the White House in 2011, among other honors), Larkins said the call from Forbes came as a surprise.

Larkins, who traveled to Canada to solo at age 14 and was chosen as a national spokesman for the Experimental Aircraft Association’s Young Eagles program in 2000, has grown his fractional Cirrus business to six aircraft under management, with a full-time staff of 20. His innovative approach to fractional ownership has set Larkins apart, Forbes noted, and he said it is “kind of cool to hear that from Forbes.”

Ascension Air continues to grow, Larkins said, and the company is now preparing to launch a second operating base in Ft. Lauderdale, Fla. Larkins said the fresh attention from mainstream media, particularly looking at personally flown fractionals, bodes well for the growing business model. “I’m really excited about the fact that that’s kind of even being noticed,” Larkins said in a telephone interview.

Larkins said there have been “extremely positive” indications from the first batch of lease customers who are now coming due for renewal, and while he had hoped to have a second location up and running a few months ago, he is also being careful not to grow so fast that the customer experience suffers.

“The concept has been proven here,” Larkins said. “Things are working the way they were supposed to be working… everything we promised our owners we were going to be doing, we are doing.”