Get the app Get the app
Already a member? Please login below for an enhanced experience. Not a member? Join today
News & Media Omaha airport eases restrictions 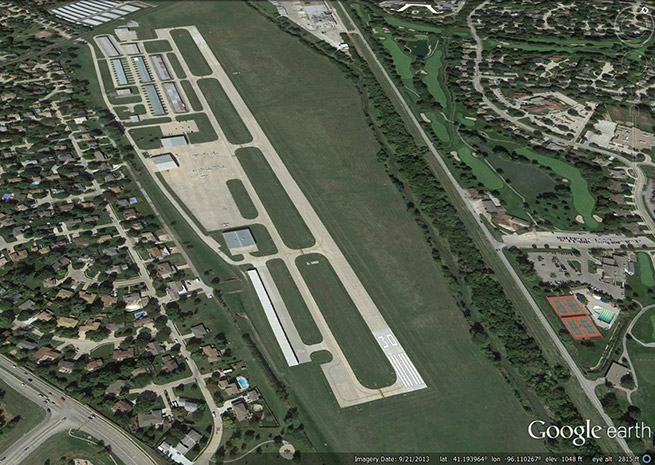 The airport authority in Omaha, Neb., has eased a weight restriction on the single concrete runway at Millard Airport, and pledged a maintenance effort this year following an FAA inquiry that was originally prompted by AOPA.

AOPA Vice President of Airport Advocacy Bill Dunn wrote to FAA officials in October detailing the association’s concerns that the Omaha Airport Authority, which also operates Eppley Airfield, the city’s commercial aviation hub, was restricting access. AOPA had received reports from aircraft operators that local officials were refusing flights based on aircraft weight, a tactic that the local airport authority had employed in years past.

The 3,800-foot runway, rehabilitated in the 1990s, was engineered through most of its length to accommodate aircraft weighing up to 30,000 pounds. During rehabilitation, a very small section of the runway was engineered to a lower standard—12,500 pounds—and the airport authority unilaterally imposed that limit based on maximum certificated aircraft weight, not the actual operating weight of any given flight. The authority has meanwhile continued to accept federal funding for airport improvements, most recently a $408,500 grant in 2010 for runway rehabilitation. Such grants require local airport operators to maintain access, and maintain the airport facilities as well, and Dunn highlighted those issues in his letter to the FAA.

“It is our opinion that in refusing to allow aircraft operators whose aircraft operations are being conducted under the 12,500 pound weight limit, the airport sponsor is implementing an access restriction to the airport,” Dunn wrote, adding that operators willing to limit flights to 12,500 pounds, even if the aircraft is capable of higher weights, should be allowed to use Millard.

The FAA responded quickly to Dunn’s inquiry, detailing the results of the federal inquiry in a Jan. 9 letter: The FAA required the airport authority to increase the runway weight limit to 25,000 pounds, and also accepted assurances from the local authority that the runway will be maintained with a surface overlay planned this year.

The FAA determined that the Omaha Airport Authority is in compliance with the various requirements, provided that the overlay project proceeds as planned.