Get the app Get the app
Already a member? Please login below for an enhanced experience. Not a member? Join today
News & Media Untapped potential 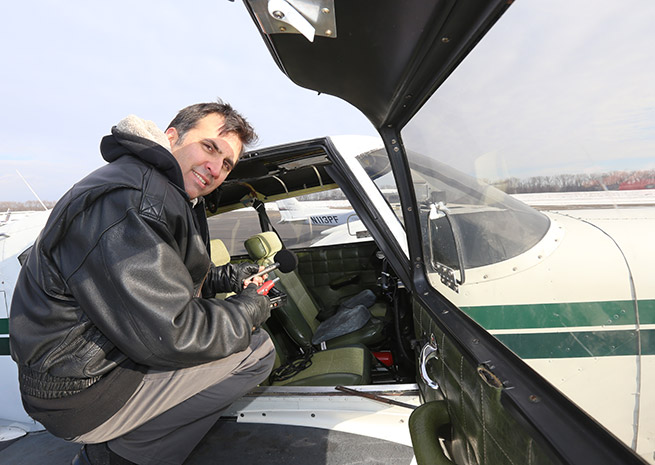 On a chilly December day in Hartford, Conn., Scott Gentile rented a Piper Warrior with no intention of flying it. Instead, Gentile, a private pilot and the founder of A2A Simulations, circled the running airplane on the ramp, pausing in various spots to crouch and record while instructor Tim Chase worked the controls, carefully noting changes in RPM setting according to Gentile’s plan. Outside the cockpit, the creator of digital aircraft captured the sounds of engine and propeller at various angles as Chase worked the throttle. Using sophisticated microphones and digital recorders, Gentile was gathering the raw material for a modern digital aircraft.

Gentile has a passion for flying, both in the real world and the virtual. “I learned how to build PCs for the sole purpose of getting better frame rates,” he recalled of his first forays into aviation simulation.

Two decades ago, Gentile bought a 1978 Warrior II, and found existing desktop-based simulators lacking the kind of attention to detail that would make them truly useful tools for real-world pilots. In those days, a virtual Cessna sprang to life instantly, without penalizing pilots who don’t pause to allow the oil to warm. The fact that software developers hadn’t troubled themselves to model the gradual increase in temperature, to pick one example, frustrated Gentile. Today, he responds to online critiques of his work from simulator users by refining his digital aircraft to make them more accurate, more like the real thing. 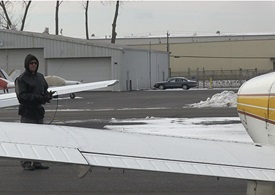 “A big part of this is sound,” Gentile said, explaining how microphones are used to capture even the smallest noises, “every switch, dial, creak … we even shake the airframe to get the proper squeaks.”

Proper squeaking is only one aspect of the verisimilitude Gentile seeks. His latest product, a digital Cessna Skyhawk, includes a digital preflight inspection complete with potential squawks that a pilot would not want to miss. In the virtual air, instruments from the magnetic compass on down perform as their real-world counterparts would, and Gentile has even crafted a virtual passenger whose mood and reaction to flight can vary.

“Heidi was inspired by all the people I took up in my Piper Cherokee,” Gentile said. “People love that passenger.”

Gentile’s market includes individual consumers who can download his digital aircraft add-ons for use in popular desktop flight simulation programs for $50 or less, and, more recently, Redbird Flight Simulations, where Jeff Van West, director and CEO of Redbird Media, said realism is one key to making simulation realize its full potential as an aviation training tool.

“By having it fly realistically, or by having the oil canning sounds as you’re taxiing around the airport … that has a very tangible, measurable result,” Van West said.

Nearly 17 years after the FAA first approved personal-computer-based simulators for use in pilot training, and just as the industry is reaching new heights in realism, the agency has thrown a wrench in the digital works, acting in recent weeks to curtail the amount of time that can be logged toward ratings and certificates in the class of simulator that small flight schools can afford: advanced aviation training devices (A-ATD). That move, which effectively cuts in half the number of simulated hours that can be counted toward an instrument rating (from 20 to 10) in a wide range of devices, is roundly opposed by AOPA and industry leaders. 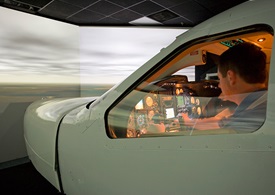 “It’s nuts. It defies common sense what they’ve done,” said John Dixon, president and CEO of Elite Simulation Solutions,  echoing a sentiment expressed unanimously in interviews with others who build simulators for general aviation. “There’s no data to indicate why you should take a 20-hour credit instrument training device and reduce it to 10.”

No one claims that any simulator can replace real-world flight training entirely, but many in the industry—including instructors and other pilots who are not in the business of building simulators—agree that more teaching and recurrent training could be done in a simulator than is currently typical.

Many of those features have trickled down from the top end of the flight simulation world, multimillion-dollar systems that re-create specific cockpits in exacting detail, utilizing hydraulic systems to create motion, high-resolution visual displays, and primarily used for training turbine pilots in both civil and military circles. At a fraction of the cost (Redbird’s most popular model, the FMX, a full-motion A-ATD, starts at $59,800, with a control-loading yoke available for an additional $7,495), the current generation of advanced training devices have been winning converts.

Aviation entrepreneur Steve Cunningham recently doubled the size of Nashua Flight Simulator, now based in Manchester, N.H. When Cunningham was interviewed by AOPA Senior Editor Dave Hirschman in 2008, he had two simulators running at the training center. Now, he runs four (Cunningham prefers Elite models), and a growing business focused on recurrent training, instrument training, and training required for insurance purposes in turbine, turboprop, and pressurized aircraft. Cunningham uses simulators to put students in situations that develop and test skills no pilot looks forward to actually having to use. If it ever really happens, “it won’t be the first time you lose an engine at 200 feet when you’re going into the clag,” he said.

The only time Cunningham’s clients will fly an actual airplane is to demonstrate a circle-to-land approach for an instrument proficiency check (as the FAA requires). He said simulation has gained acceptance among instructors and flight schools in the past five years, despite a persistent belief among some that a simulator is no substitute for a spinning propeller. For one thing, simulators have pause buttons, allowing instructors to seize teachable moments in the midst of a maneuver, rather than during a post-flight debrief.

“I think it is much more accepted, and I think people are beginning to see the value in what you can do with a piece of equipment like a flight simulator,” Cunningham said. His business, growing at a rate of about 20 percent per year since 2010, may prove to be a model for the future.

Redbird has done much the same, creating Redbird Skyport in San Marcos, Texas, as a combination flight school and aviation laboratory, where simulation is an integral part of primary as well as advanced training.

“I know I can teach people to fly using these devices,” said Redbird CEO Todd Willinger. He has run a small-scale, unscientific experiment with a group of students, taking them from zero time to a simulated checkride entirely in a simulator, and then observing how many hours of real-world flying were required to complete training and pass an actual checkride. While he had anticipated a more dramatic reduction in required aircraft time, Willinger said it was nonetheless “a pretty successful experiment,” and one he may repeat, though the early results suggest that simulation should be mixed with actual flight time at regular intervals throughout the process. Willinger said it is very clear that fundamental skills can be learned effectively in a simulator, and there remains significant unrealized potential to reduce the cost of pilot training—among the factors that have driven a decline in the GA pilot population in recent years.

“It’s more efficient use of your very high-priced aircraft asset,” Willinger said. That notion has been more readily embraced overseas—particularly in the past three years. Where 95 percent of Redbird’s products were once sold in the U.S., foreign customers now account for as much as 40 percent of the business. That could increase, if the FAA persists in limiting the number of hours that can be logged in devices that typically run in the $20,000 to $80,000 price range. 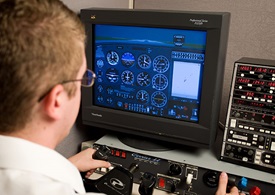 “I find it unconscionable what the FAA is doing,” Winninger said. “We’re hopeful somebody will see the light.”

Altman has likewise seen a turnaround since the market truly tanked in 2009, and now is working through a significant backlog. The down years allowed the company to focus more effort on product development, and the fruits of that labor are now reaching the market in growing numbers.

“We’re going to continue to make them better and better,” Altman said. “We’re hoping that the FAA will recognize this.”