Get the app Get the app
AOPA will be closed July 4th, in observance of the Independence Day holiday. We will reopen at 8:30 am ET on Tuesday, July 5.
News & Media Textron on a (special) mission

Textron on a (special) mission

Military and surveillance capabilities on display

From the Scorpion twinjet crafted with budget-conscious military customers in mind to the Baron G58 rigged for intelligence and surveillance, Textron Aviation is making a concerted push for special missions at the Farnborough International Airshow.

The parent of Cessna and Beechcraft (Textron also owns Bell Helicopter) issued a flurry of press releases leading up to the show, which draws both potential military and law enforcement customers, and the general public, July 14 through 20. The company announced new deals including a U.S. Air Force order for 29 T-6 trainers, and the pending delivery of 11 T-6s to New Zealand. 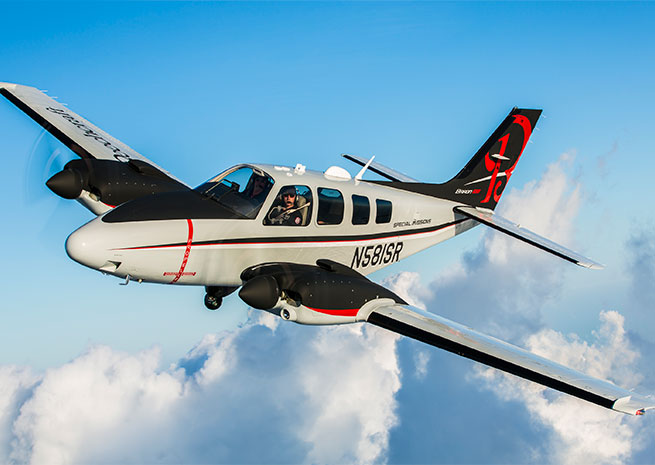 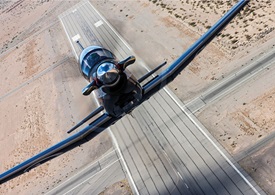 The Mexican Navy took delivery of the first of four King Air 350ER models fitted for special missions, and the Wichita, Kansas, company dispatched another to Farnborough, noting that the entire Cessna/Beechcraft product line can be fitted for surveillance and other specialty missions including air ambulance, training, and utility transport.

“With the combination of the Beechcraft and Cessna products within Textron Aviation, we now offer the largest proposition of special mission platforms in the industry,” said Dan Keady, vice president, special missions, in a news release. “We have seen a significant growth in special mission activity around the globe and anticipate this market will continue to grow across our aircraft platforms.”

The Scorpion twinjet, offered as a low-cost option for military customers seeking an economical trainer and attack aircraft, made its international public debut at Farnborough. Priced around $20 million (about a quarter of the cost of an F-16 with spare parts) and costing $3,000 an hour to operate, Textron hopes the Scorpion will find a global market. The BBC reported that frugal fighter customers have yet to be identified, though company officials reported numerous "conversations" and expressed  optimism.

The Scorpion was developed with off-the-shelf technology in less than two years, borrowing components from the company’s general aviation lineup, including the Cessna Citation; the freshly certified Citation X+ made its first trans-Atlantic crossing to attend the Farnborough show, completing the trip in five hours, 33 minutes with an average ground speed of 502 knots, the company announced in yet another news release. That was short of the Mach 0.935 maximum cruise, touted prominently in the company's pitch for the updated Citation X.

“We filed a fairly standard flight plan to demonstrate the capability a customer can expect in normal operations, and it was very impressive,” said Kriya Shortt, senior vice president, sales and marketing, in a Textron Aviation news release. 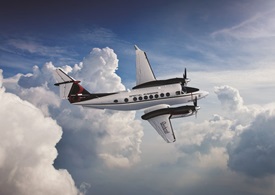 Textron also announced a new tour for another general aviation stalwart adapted for special missions: the Baron G58 piston twin is scheduled a wide-ranging tour with a stop at the Airborne Law Enforcement Association Expo July 16 through 19 in Phoenix, Arizona. That will be followed by an appearance in August at the Latin American Business Aviation Conference & Exhibition in Brazil, and then a return to Europe (the ISR G58 first appeared at Farnborough in 2012).

The intelligence, surveillance, and reconnaissance version of the Baron can be fitted with an array of instruments, including a forward-looking infrared (FLIR) camera system, an operator console housing a mapping and mission management computer, and communications (including data link) systems suited for the job. The company has reported one sale so far.