Get the app Get the app
Already a member? Please login below for an enhanced experience. Not a member? Join today
News & Media Aspen Avionics expands ADS-B product line 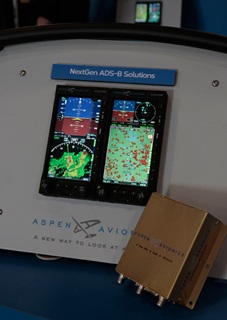 If you fly your aircraft for transportation, and that does not include the Piper Cub flown away from major airports for fun, you will have to meet the FAA mandate for Automatic Dependent Surveillance-Broadcast (ADS-B) radios mounted in the panel by 2020. The radios tell air traffic control where you are, how fast you are going, and at what altitude. There are two kinds: ADS-B Out, the mandatory one, and ADS-B In that allows you to receive traffic and weather information. Aspen Avionics will offer in October an expanded line of ADS-B Out products to help owners comply with the mandate.

ADS-B Out is key to the FAA's Next Generation Air Transportation System, referred to as NextGen. “Our goal is to provide a wider range of cost-effective opportunities for aircraft owners to meet the ADS-B Out requirement in 2020. I think we’ve achieved that by expanding our product line,” Aspen's Perri Coyne said.

Two new single-band receivers will complement Aspen’s stable of two dual-band transceivers and one receiver the company previously released. All the radios offered include both "In" and "Out" capability. The least expensive is the ATX100 for $3,495 that provides an ADS-B solution for aircraft equipped with a Mode A/C transponder and a Wide Area Augmentation System (WAAS) GPS navigation receiver. It receives ADS-B traffic and subscription-free weather, and meets the ADS-B Out mandate below 18,000 feet. The ATX100G is the same unit, but with the addition of a WAAS GPS receiver. It retails for $4,995. Both units are expected to be approved and ready to ship starting in October.

At the top of the line of Aspen's existing ADS-B offerings is the ATX200G dual-band "In," 987 MHz "Out" transceiver at $5,495 with an internal WAAS GPS sensor that provides an ADS-B solution for aircraft already equipped with a mode A/C transponder, but without a WAAS GPS navigation receiver. It receives ADS-B traffic and subscription-free weather, and meets the ADS-B Out mandate below 18,000 feet.

Aspen also announced aftermarket approval for its EFD1000H on the Enstrom 480B, further solidifying the company’s position in the helicopter market. Aspen CEO John Uczekaj said almost 80 percent of Robinson R44 and R66 coming off the assembly line are being shipped with an Aspen system installed.