First production Icon A5 makes a splash at AirVenture

With the fanfare usually reserved for business jet unveilings, Icon Aircraft unveiled its first production A5 amphibious light sport aircraft at EAA AirVenture on July 27. After a moving corporate video highlighting the free-spirit lifestyle cultivated by the new generation airplane and with thunderous applause of several hundred at the Icon exhibit, the staff pulled the drape off of ESN-1, engineering serial No. 1.

Founder and CEO Kirk Hawkins said ESN-1 was built over the past five months using production processes and components and first flew on July 7 in Tehachapi, California. ESN-1 is the first of three that will be used to verify performance and complete FAA approval prior to start of customer deliveries in May 2015. ESN-2 is under construction and will undergo structural testing this fall.

Production will occur at the company’s new facility in Vacaville, California, starting in 2015. The center will also house a training facility where Icon plans to provide primary and model-specific training. Hawkins said they plan to deliver about 70 airplanes in the first 12 months and ramp up from there to as many as 500 a year. He predicted it would take at least three years to deliver the 1,000 airplanes for which they already have orders.

Icon is auctioning off serial number 30, scheduled for delivery in early 2016, with a portion of the proceeds being donated to the Veterans Airlift Command. Find more information on the auction here. 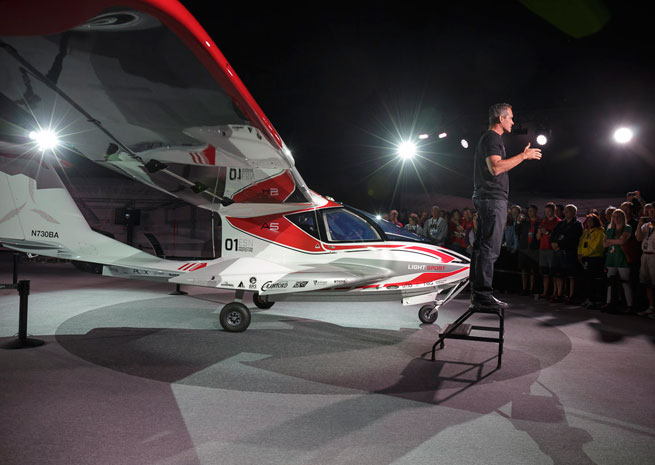 Contributor (former Editor in Chief)
Contributor and former AOPA Editor in Chief Tom Haines joined AOPA in 1988. He owns and flies a Beechcraft A36 Bonanza. Since soloing at 16 and earning a private pilot certificate at 17, he has flown more than 100 models of general aviation airplanes.
Go to Thomas B Haines's Profile
Topics: Light Sport Aircraft, Aviation Industry, EAA AirVenture