Rotax rolls out 912 iS Sport

Rotax now offers a new, follow-on engine to its popular 912 iS engine. From now on, the company will deliver its new, 100-horsepower fuel-injected 912 iS Sport engines. They feature a newly designed, larger airbox and air intake manifold, plus a software upgrade that yields better fuel economy, more torque, and thus better takeoff and climb performance than its predecessor.

Fuel injection means that, unlike the 912 ULS, there are no carburetors to adjust.

The engine is able to use 91-octane auto fuel with up to 10-percent ethanol content, or 100LL avgas.

European Aviation Safety Agency (EASA) certification was granted for the 912 iS Sport on June 17. Production of the engine began in July. An ASTM-approved field upgrade kit is in development for all 912 iS engines now in service. The kit will be offered until October 2014, and Rotax expects that 88 percent of the 912 iS-equipped fleet will be retrofitted by then. The retrofit kit will cost approximately 1,300 euros, or about $1,800. A complete, new engine will cost approximately $25,000.

All manufacturers that used the 912 iS in the past, such as Pipistrel and Kitfox, will now produce airplanes with the 912 iS Sport. Flight schools using 912 iS-equipped airplanes will also be able to participate in the upgrade, Rotax said. 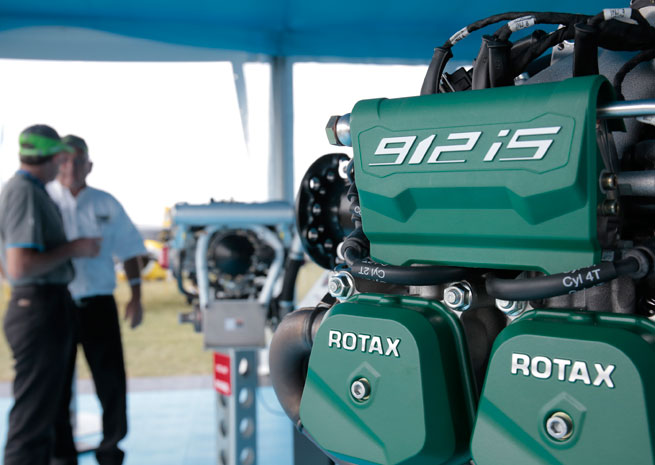 AOPA Pilot Editor at Large
AOPA Pilot Editor at Large Tom Horne has worked at AOPA since the early 1980s. He began flying in 1975 and has an airline transport pilot and flight instructor certificates. He’s flown everything from ultralights to Gulfstreams and ferried numerous piston airplanes across the Atlantic.
Go to Thomas A. Horne's Profile
Topics: Light Sport Aircraft, EAA AirVenture, Events