Get the app Get the app
Get the latest news on coronavirus impacts on general aviation, including what AOPA is doing to protect GA, event cancellations, advice for pilots to protect themselves, and more. Read More
Already a member? Please login below for an enhanced experience. Not a member? Join today
News & Media SocialFlight to create nationwide Parade of Planes

Online aviation event hub SocialFlight is working with aircraft manufacturers to host a nationwide Parade of Planes during the month of September.

SocialFlight Founder Jeff Simon said the Parade of Planes will give people an opportunity to see the latest aircraft on the market without traveling thousands of miles to a major aviation event. That’s because they’ll be bringing the parade to you.

While not an actual parade of aircraft on a street or runway, the month-long event will let pilots see a demonstration aircraft, talk to a sales representative, visit an aircraft display, or take a demo flight (if they are being offered), at their home airport or one nearby.

Here’s how it works. Manufacturers will list all of their demonstration aircraft stops at airports across the country, and pilots can be notified of those stops through a weekly email from SocialFlight. In September, pilots also can visit www.SocialFlight.com or download the free app, click the Parade of Planes button, and have all of the stops associated with it filter to the forefront.

Simon said he plans to expand the model later to include submarkets within aviation, such as avionics shops with events.

SocialFlight has more than 30,000 subscribers and reaches more than 200,000 aviation enthusiasts, Simons said. The product highlights aviation events, airports, and “100,000 places you can walk to from an airport,” Simon said. It also includes social networking capabilities. 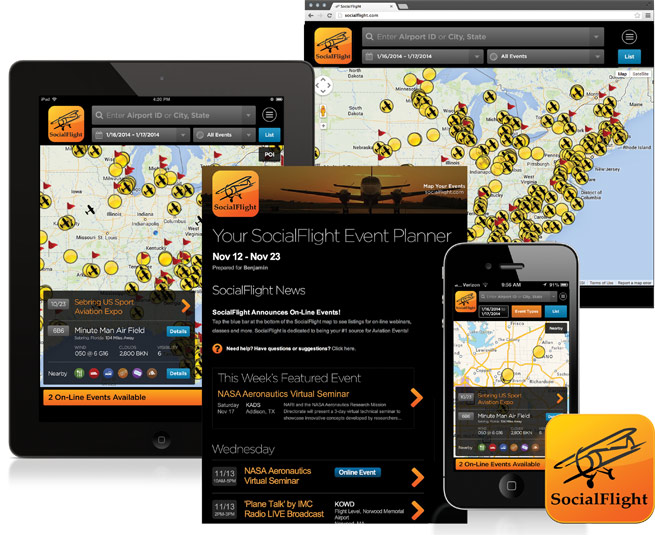