Get the app Get the app
AOPA will be closed July 4th, in observance of the Independence Day holiday. We will reopen at 8:30 am ET on Tuesday, July 5.
News & Media Earhart completes round-the-world flight with help of GA industry 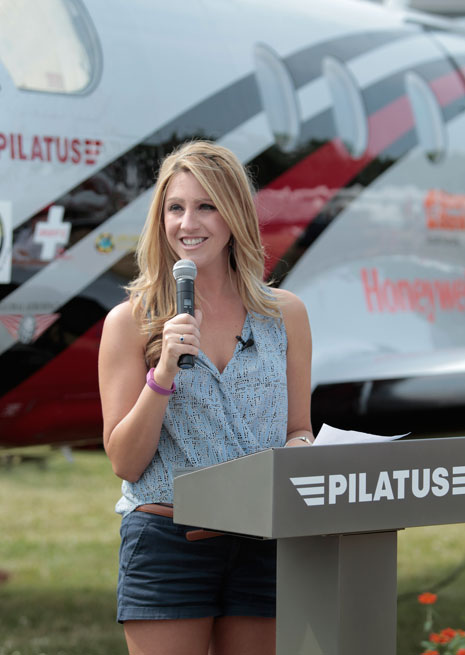 Fresh off her around-the-world flight in a Pilatus, Amelia Rose Earhart spoke about her adventure at EAA AirVenture in Oshkosh, Wisconsin, July 28, and credited the trip’s success with the support she received from the general aviation industry.

Earhart, an instrument-rated private pilot, flew a Pilatus PC-12 NG around the world, retracing the path her namesake, Amelia Mary Earhart, flew in 1937. Earhart has remained a legend and a mystery for more than seven decades since her aircraft disappeared over the South Pacific. Numerous expeditions have launched to try to find her aircraft.

“It is this legacy that inspires Amelia Rose each day to chase her own adventures and encourage others to do the same,” Earhart’s website says. Earhart flew with co-pilot and flight instructor Shane Jordan, who has more than 4,500 hours in Pilatus PC-12s.

Earhart and Jordan departed Oakland, California, on June 26 and landed there July 11 after flying more than 24,000 miles in 108 hours of flight time. Earhart claims she has set the record for the youngest woman, 31, to circumnavigate the world in a single-engine aircraft.

“I’m overwhelmed by the amount of support my partners provided leading up to and during this flight,” Earhart said in a press release. “I dreamed about this adventure for a long time, and to know that this many incredible companies and individuals shared my vision is truly humbling. There is no way I could have completed the journey without them.”