Get the app Get the app
Already a member? Please login below for an enhanced experience. Not a member? Join today
News & Media Avgas replacement: It’s not just about octane

Shell Aviation talks about steps toward an unleaded avgas 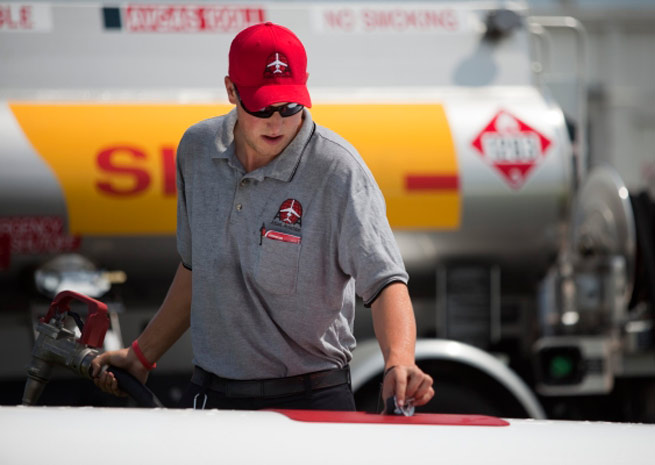 After testing more than 3,000 formulas over a 10-year period, Shell Aviation submitted its candidate fuel to the FAA for consideration as a fleet-wide, unleaded avgas replacement in July. Company officials at EAA AirVenture were optimistic about the Piston Aviation Fuels Initiative’s plan to have a replacement in place by 2018 but acknowledged that there are many challenges to overcome in the next four years.

What the FAA, fuel industry, and aviation industry are trying to do—certify an unleaded fuel that will work in all piston engines in the general aviation fleet and come as close to the specifications as leaded avgas as possible to minimize operational limitations—has never been done before.

“It’s never been done before, but everyone wants this to succeed,” said Michael Sargeant, Shell Aviation’s unleaded avgas commercial leader. “Everyone needs this to succeed.”

The FAA is currently reviewing nine candidate fuels submitted from five groups: Afton Chemical Company; Avgas LLC; Shell; Swift Fuels; and a consortium made up of BP, TOTAL, and Hjelmco. Shell Global Technical Manager of Aviation Fuels Robert Midgley said the FAA will be judging the fuel properties of each candidate against 21 specifications that are key to ensuring a fuel is safe for aircraft engines.

Of critical importance, Midgley said, is taking what has been learned from 90-plus years of experience flying with avgas, and making sure the new fuel is as close to the historical norm as possible. And, he explained, it’s more difficult than just removing the lead.

“It’s not that easy,” he said, adding that if had been easy, lead would have been removed from avgas 20 or 30 years ago. “It’s not just the octane,” he said, but the “other 20 specs are important.”

Midgley said that Shell’s fuel meets 19 of the 21 specifications and is close to meeting the remaining two: final boiling point and energy density. Shell has performed numerous engine bench tests with the fuel and flown with it in a Piper Saratoga. The company said will begin more extensive flight testing later this summer, but tests so far show that the fuel has the same detonation and performance characteristics as leaded avgas.

Sargeant was quick to point out that Shell, or any other fuel supplier, can’t bring an unleaded product to market alone. “The key to bring any fuel to market,” he said, is a “collaborative space,” that includes testing support and historical data from engine and aircraft manufactures, aviation groups, and the FAA.

That’s where the PAFI steering group comes in. The group includes the FAA, AOPA and other aviation advocacy groups, and the American Petroleum Institute. Through PAFI the government and aviation and fuels industries will work to create tests for the fuels that will lead to data needed for the fleet-wide approval of the fuel or fuels with the least impact on the existing fleet.

“Without that PAFI process, it would be impossible to bring a fuel to market,” said Midgley. “It’s really turning the process 180 degrees.” Historically, the FAA has certified engines to run on certain fuels. But through this process, the FAA’s goal is to have a new fuel work in existing piston engines.

Since PAFI was created, Midgley said that he is starting to see the aviation industry switch gears and really step up to participate in the process—beyond the testing support Continental, Lycoming, and some aircraft manufacturers have already been doing with Shell.

Many pilots are concerned about what the replacement fuel will cost. While it is impossible to estimate a final cost because of the multiple factors that make up the cost of a fuel—the components in the formula, distribution infrastructure, taxes and fees, etc.—Midgley said that a replacement is “unlikely to be cheaper … at least not significantly cheaper.” He explained that from a component standpoint, what is going into the unleaded fuel costs about the same as the components that go into leaded avgas. However, the component cost is a “small portion” of the overall cost of the fuel.

The new fuel also could enjoy a larger market than leaded avgas. Midgley pointed out that would be good news for the light sport aircraft industry. LSA engines don’t like the lead in avgas, but they also shouldn’t run on gasoline from the pump that has ethanol in it. A lead-free, ethanol-free aviation fuel would be beneficial to that market.

Beyond ensuring the right fuel is put into the aircraft and checking it for contamination, many pilots don’t give the fuel running through their aircraft’s engine a second thought, yet it is the one provision in an aircraft that is not duplicated and does not have a failsafe, said Midgley, who earned his pilot certificate in Europe.

The reliability and safety leaded avgas has offered aviation over the years is worth celebrating, he said. “The industry as a whole can take a pat on the back.”

And that’s the bar the fuel companies are aiming to meet with the fuel replacement. “We as an industry need to make sure it is intrinsically safe when it goes in the aircraft,” Midgley said. “At the moment, we worry about that so you don’t.”